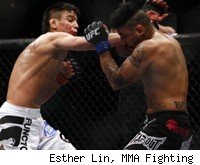 Miguel Torres became the bantamweight champion of the world while eschewing big training camps with well-known MMA gyms to stay home and train at his own gym in Indiana. But Torres has now lost three of his last five fights, and as he prepares to take on Nick Pace at UFC 139 on Saturday, he says it's past time for his buddies back home to understand that he needs to go elsewhere to get better.

Torres posted a heartfelt message on Facebook saying that he was bothered by the attitudes of some of the people at his gym back home in Indiana, and that he couldn't allow himself to be held back by people who don't understand the sacrifices a fighter has to make to be a world champion. And in an appearance on The MMA Hour, Torres said that training with Firas Zihabi at Tri Star Gym in Montreal -- rather than at his own gym -- has been essential to his efforts to regain the bantamweight title.

In his Facebook message, Torres had harsh words for some of his old friends, training partners and students who don't understand that he couldn't allow himself to grow complacent if he wants to be the best. He expanded on those comments on The MMA Hour.

"They want me to stay in my gym in Hammond," Torres said. "It doesn't work that way. For me to get better I have to train with better guys, that are ahead of the game, and seek better training partners."

Dealing with some of his local buddies has been difficult because they haven't been supportive, and Torres even said he was "robbed" by a former manager, although he declined to go into details.

"I'm not going to go out there and say anything. I have some issues with a couple guys that owe me some money, and that kind of held me back for a little bit, too," Torres said. "I'm not trying to carry that burden anymore. It's too much."

Torres says that while he has left some old friends behind in Indiana, Zihabi has turned his career around by teaching him to strategize and fight under control.

"My trainer and personal friend Firas Zihabi has controlled me," Torres said. "There's other ways to win a fight where you're not going to get your hand broken or your brain smashed in or your face scarred up. ... I've been training extremely hard. My mind is in a good place."

And having his mind in the right place is all about focusing on winning, starting on Saturday against Pace. Torres said he believes that through it all, he's going to get the bantamweight title back.

"You're going to see me fighting for the title," Torres said. "One hundred percent."