Falling Action: Best and Worst of UFC on FOX 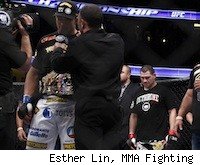 You go to enough UFC events, you get a feel for the rhythm that they usually follow. From prelims to the Spike TV undercard to the main card to the main event, it's a gradually building symphony of violence that follows a fairly predictable pattern.

But Saturday night's UFC on FOX show was a completely different experience, for several reasons. It was essentially a nine-fight undercard, one right after the other, and then a main event that started at around 6:30 pm local time. By 6:45 we had our laptops packed up and press row was vacated. By 8 pm we were in the Honda Center media room, watching Pacquiao-Marquez while hammering away at our keyboards with one eye on the screen.

It was, in other words, a strange night. Like Dana White, I'm mostly just glad it's over. Now we can get back to the normal fight night routine, which is at least exhausting in a familiar way. But first, the biggest winners, losers, and everything in between from the UFC on FOX debut.


More Coverage: UFC on FOX Results | UFC on FOX Post-Fight Press Conference
Biggest Winner: Junior dos Santos
Say what you will about whether the quick finish was bad or simply not ideal for the UFC's FOX debut, but you can't blame JDS. Actually, I guess you could if you really wanted to, but you'd sound like a real jerk. It's not his job to make fights last; his only concern was punching his opponent in the face until the referee told him to stop, and that's exactly what he did. Right from the start dos Santos had no problem locating Velasquez's face with his fist, and he did so without opening himself up for takedowns. He got away with a short night of work thanks to that big right hand of his. Considering the knee injury that he said he came into the fight with, that quick finish was the best-case scenario for "Cigano" even if it wasn't exactly what the UFC hoped for. Now he'll get to take some time, see to his injury, and wait for Brock Lesnar and Alistair Overeem to figure out who he'll defend his brand new belt against. Who knows, maybe he'll even become the rare heavyweight champ who can hang on to it for a little while.

Biggest Loser: Cain Velasquez
For starters, let's ease up on the game plan criticism. The guy only got to fight for a minute. What, you thought he was going to shoot for a double-leg the moment "Big" John McCarthy got out of the way? Even if you want to get the fight to the mat, you can't go into a heavyweight title bout telling yourself that you've got no prayer on the feet. Conceding that aspect of the fight to your opponent is a psychological kiss of death, so maybe we shouldn't crucify Velasquez for daring to engage in even the briefest of striking exchanges with dos Santos. That said, the night couldn't have gone much worse for the former champ. I'm not sure if the knee injury was worse than he let on, but he didn't seem to have the intensity or the explosiveness that we've come to expect from him right out of the gates. Dana White put plenty of pressure on him to deliver the fireworks, so maybe it's unfair of the UFC prez to then criticize Velasquez for not immediately turning the bout into a wrestling match. Velasquez seemed perfectly willing to try and give us the war we were promised, whether that was a good idea or not. Unfortunately for him, he ended up on the business end of the blitzkrieg. 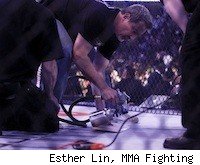 Most Bizarre Sight: The Octagon's Fresh Paint Job
Apparently the UFC and FOX felt that network TV viewers could handle seeing blood if it was coming out of a human being, but old plasma left over from the night's previous bouts was more than they could bear. So after the Guida-Henderson bout had concluded and before dos Santos and Velasquez took the cage, a small crew of workers got out the paint and heat gun and erased those bloodstains before the FOX cameras caught sight of them. The thing is, the mat wasn't even all that bloody. Sure, after nine fights some of the red stuff had spilled, but we've seen much worse inside the Octagon. Those "millions of new viewers" haven't though, and as White said in the post-fight press conference, the UFC is looking to "ease into this." Even if it means choking the poor cageside photographers with paint fumes.

Most Deserving of a Title Shot: Ben Henderson
Lately it's seemed like nothing short of a dozen straight wins will earn you a crack at the lightweight belt, but Henderson has made the most of his three UFC bouts. After destroying Jim Miller and edging out a very game Guida, I don't see how anyone could say he hasn't earned his shot at Frankie Edgar. And, with Henderson's all-around blend of skills, I don't see how anyone could say this won't be a thrilling bout when those two get together in Japan. At least you know that one will be televised.

Least in Need of a Title Shot: Clay Guida
The Duder might not like to hear it, but he's probably never going to be a UFC champion. And that's okay. Really, it is. He might not think so now, and he might not even think so ten years from now, but his legacy will be built on individual bouts rather than broad career achievements. His fights with Roger Huerta, Diego Sanchez, and this one with Henderson are battles that all of us (or at least those of us who actually saw them) will remember. Does it matter that he lost all three of those fights? Not really. That's because when Guida gets an opponent he can exert his will on, the outcomes tend to be less spectacular. It's when he fights superior, more gifted opponents that both are forced into a species of greatness. He doesn't have to win them all to be loved by fans and admired by his peers. He doesn't need a belt, either. No matter how badly he might want one.

Win Most Likely to Be Overturned: Robert Peralta over Mackens Semerzier
Initially it looked like both Peralta and Semerzier landed almost simultaneous punches, but it was Semerzier who got the worst of it. Upon further review, it was clear that a clash of heads was the real culprit. Peralta didn't do it on purpose, and the lump on his forehead (which sprang up immediately) tells you that he didn't escape from it unscathed either. Still, it was pretty obvious that Semerzier got a one-way ticket to Queer Street thanks to something that was definitely not a legal strike, and that's grounds for an appeal. In a just world, the result of this fight will get changed to a no contest. 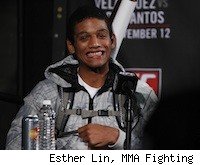 Most Surprising: Alex Caceres
I was starting to wonder what the UFC saw in this kid, other than personality. He lost two straight after his stint on TUF, didn't look very good in either bout, yet somehow still had a spot on the roster. But as it turns out, maybe he was just in the wrong weight class. Against Cole Escovedo in his bantamweight debut, "Bruce Leeroy" looked like an entirely different fighter. He kept Escovedo guessing on the feet, stymied his attacks all night, and had the confidence to throw some unconventional stuff out there in search of the victory. After winning the decision he showed up to the post-fight presser with an enormous grin on his face, looking like a kid who'd just been told that he was going to Disneyland (which just happened to be right down the street). I admit, it was refreshing to see a young fighter who actually seemed glad to talk to the media after a fight. Give him a couple years, though. See if he doesn't change his mind about that.

Most Brutal Finish: DaMarques Johnson
He may not have earned the Knockout of the Night award for starching Clay Harvison in the first round, but he probably should have. I know, I know -- there's no small amount in politics involved in those, and the main event will get it over a prelim'er every time, but still. Johnson lunged in with a beautiful left uppercut that Harvison never saw, then followed up with a right hand that was so hard I almost expected Harvison's childhood memories to come spilling out onto the mat. Granted, this was a fight Johnson was supposed to win, and win fairly easily, but it never hurts to make a memorable impression. Well, unless you're Harvison. Then it hurts a lot.