After Reshuffling, UFC 139 Spike Prelims to Feature Bader vs. Brilz, McDonald vs. Soto 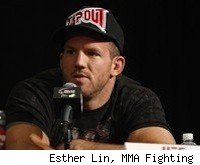 The UFC 139 preliminary fights on Spike have been reshuffled, with a bantamweight bout pitting Michael McDonald against Alex Soto moved into the two-fight showcase.

It had been previously reported that a middleweight encounter between Chris Weidman and Tom Lawlor would be included, but on Monday's edition of The MMA Hour, Lawlor said that information was incorrect, and a Spike representative confirmed to MMA Fighting that the fight would not be aired.

No reason was given for the change on the one-hour telecast, which is also set to feature Ryan Bader against Jason Brilz.

McDonald is considered to be one of the bantamweight division's top prospects. Just 20 years old, he's already competed 14 times as a pro, holding a 13-1 record. He's 3-0 under the Zuffa banner, most recently defeating Chris Cariaso in a split decision back at UFC 130. Soto, meanwhile, will be making his major MMA debut. He's 6-0-1 in his carer.

The Bader-Brilz bout features two fighters in need of a win, as both come into the event on two-fight losing streaks.

Meanwhile, Weidman vs. Lawlor will air live on Facebook.com.

UFC 139 will emanate from the HP Pavilion in San Jose, California with a main event of Dan Henderson vs. Mauricio "Shogun" Rua. The five-round main card will air on pay-per-view.