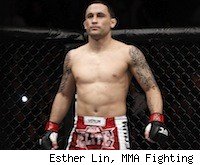 Less than two hours after Ben Henderson became the No. 1 contender, he already has a date set for his championship match against current titleholder Frank Edgar.

The two will meet on February 26, 2012 at the Saitama Super Arena in Japan, at the event likely to be numbered UFC 144.

UFC president Dana White confirmed that the fight has been booked during the UFC on FOX post-fight press conference.

"I think it's a great matchup," Henderson said after finding out his fate. "I'm as confident as any fighter here in the UFC. As far as the matchup with Frankie, I have to do a better job sticking to the game plan ... I think I match up very well. I've got to stick to the game plan, but I'm very excited for that. Frankie and I are going to put on a great show."

Henderson improved to 15-2 with a unanimous decision victory, topping Clay Guida with a mix of striking and ground work. It was his third straight win since coming to the UFC, following wins over Jim Miller and Mark Bocek.

Edgar is coming off a UFC 136 performance that will probably be considered as a Fight of the Year and Comeback Win of the Year nominee. Edgar was nearly knocked out in the first round of his fight with Gray Maynard and rebounded for a fourth-round TKO victory. Edgar is 14-1-1 overall.

White said the fight is expected to be the main event of the show, which will mark the first time the UFC brings its octagon to Japan under Zuffa ownership.