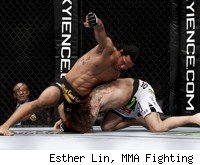 In a fight that was just as exciting and fast-paced as most expected of a matchup with two of the division's best-conditioned athletes, Ben Henderson outworked Clay Guida in the UFC on FOX co-main event to earn a shot at the UFC lightweight championship.

In a measured yet frenetic performance, Henderson outwrestled and outstruck Guida over the course of the three-round bout at the Honda Center in Anaheim, California. The cageside judges scored it 30-27, 30-27, 29-28 in his favor.

"Frankie Edgar, we got a date. Let's do it baby," Henderson said moments after the victory.
More Coverage: UFC on FOX Results | Ben Henderson vs. Clay Guida Live Blog
Overcoming a style he described as "energetic and awkward," Henderson clearly had the fight's biggest moments, knocking Guida down twice early on and leaving few openings for his opponent.

Henderson got off to a brilliant start from the get-go, dropping Guida early with a left hand and then again moments later after a wild exchange. Guida was able to buy time by attempting a takedown, but Henderson controlled most of the round with his standup, though Guida did have a late knockdown of his own.

The second was much more competitive, with Guida managing a pair of takedowns, but he could not hold Henderson down for any period of time to inflict damage. Guida also briefly threatened with a guillotine. But Henderson showed excellent composure throughout, carefully picking his strikes and outmaneuvering Guida for positioning on most occasions. During one scramble late in the round, Henderson took Guida's back and threatened for a rear naked choke as time expired.

Both fighters had their moments in the third, but Henderson controlled Guida at various points, again taking his back and hunting the submission finish. Though Guida survived, it clearly wasn't enough to get past Henderson.