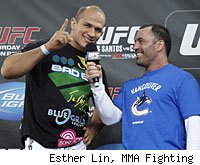 All the fighters on the UFC on Fox card will step on the scale at the UFC on Fox weigh-ins Friday, and we'll carry the live video right here at MMAFighting.com.

The weigh-in starts at 7 p.m. ET and the video is below.