UFC on FOX: How Dana White's History With Boxing Has Led Us Here 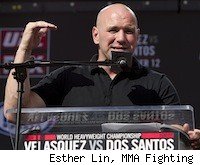 Dana White loves boxing. Sure he does. He loves it the way you love an ex who is and was absolutely no good for you, who you'll still meet for a drink when they're in town (just one, though, then I've really got to run), and who you're pretty sure is going to self-destruct one day, with or without your help.

In a way, that's what makes it possible to continue loving them. If they were doing too well, you might be bitter. But this way you can just shake your head, remembering the good times but feeling genuinely relieved that your futures are no longer tied together.

Without White's rocky relationship with the sport of boxing, maybe this FOX deal doesn't happen. Without boxing, maybe it's not so important to White to make it happen, or to make sure it goes off so smoothly that it ushers in a new golden era of combat sports on network TV. It's as if he's doing this not just because it's a savvy business move, but because this is what boxing used to do, back when they were both young and innocent and so in love.

This came up again and again when I spoke to White earlier this week for a Sports Illustrated article (yes, I'm plugging my own article, what of it?). Even when I asked him questions that, to me, seemed to have nothing to do with boxing, somehow we ended up back on the subject again. Take this exchange, for instance:

SI.com: Tell me a little about how you guys made the final decision to only do one fight, no matter what. At first it seemed like you were considering the possibility of running another fight or some highlights if you had time. How did you decide to just focus on this one fight?

White: It was [Fox Sports Media Group Chairman] David Hill. I went in and said, listen, USA's Tuesday Night Fights and ABC's Wide World of Sports, we all used to watch those, all of us who were big boxing fans. I didn't miss Tuesday Night Fights ever. Every Tuesday night I was on the couch. But when I was younger, I remember my uncles all getting around the TV and watching Wide World of Sports. When we told them the fight was going to be the heavyweight championship, they said, 'Do that, just do the one fight, the heavyweight championship.' It makes sense. That's really the way it went down. It was David Hill's call.


To recap, the question was: why only one fight? And, in a simplified form, the answer was: David Hill wanted it that way. So why did we take the little detour to talk about his addiction to Tuesday Night Fights?

Because deep down, White's still a boxing junkie. Yeah, it probably makes him sad to see what that industry has become and where that sport is headed, and he doesn't want to think he or his company has anything to do with it. As he reiterated in an open letter "to fight fans" that the UFC emailed out yesterday:

"There's always been a lot of talk about the UFC killing boxing. I've always said that boxing is hurting boxing, not the UFC. I honestly believe that many people are fans of both. And I can prove it: on September 17, the UFC drew two million viewers to a live fight on cable TV ... a couple hours later over 1.3 million fans bought the Floyd Mayweather PPV. Fight fans stayed in and watched both!"

First of all, just because the UFC and boxing both drew similar numbers on the same night, that doesn't necessarily mean they drew the same people, no matter how many times White repeats that claim. Second of all, since when does White go out of his way to assert that he and his competitors are helping each other?

Even on the eve of the landmark UFC on FOX show, the specter of boxing -- specifically, Manny Pacquiao -- looms over everything. When White so much as mentioned Pacquiao's name at Wednesday's press conference even the pro-UFC crowd broke out into cheers. You could argue that White is trying to make the case that his FOX show is working with rather than against Saturday's boxing pay-per-view simply because he's hoping to get a little of the Pacquiao fight night magic to rub off on him, but it's more than that.

As White insisted when I talked to him about it, the money-losing venture on FOX is an attempt to do "what boxing stopped doing," and that's "investing in the future of the sport and of this brand."

Said White: "By putting this on, there's going to be a whole generation of people who grow up with the UFC on television, just like I did with boxing when I was a young kid, and just like many people did with football. It becomes nostalgic in your life and it becomes something you remember from growing up. That's what we're doing by putting this on television."

In other words, it's about indoctrinating the next generation of fight fans. It's about wedging the UFC into mainstream America's collective sports consciousness in order to insure a brighter future. But it's also, at least a little bit, about making the UFC and MMA into a new version of the boxing that White remembers, a boxing that doesn't really exist anymore, at least not in that form.

Maybe that's why it's fitting that the UFC's big FOX debut should take place on the same night as one of the biggest boxing pay-per-views of the year. Without that sport, once so available and accessible that you always knew where to find a young Dana White on Tuesday night, maybe we wouldn't be right here, right now, on the verge of an event that seems likely to propel this sport toward something, even if none of us know what.