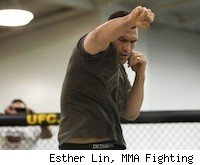 Ask the people who know what it's like to have Cain Velasquez in their faces on a regular basis, and they'll tell you that there's a big difference between thinking you can handle the UFC heavyweight champion's non-stop pressure and actually experiencing it.

"There's no doing it until you actually do it," said sparring partner and former Olympic wrestling team captain Daniel Cormier. "It's just no room to breathe. You could be winning, but he's just in your face constantly and it wears on you, man."

To hear Velasquez's teammates at the American Kickboxing Academy in San Jose tell it, simply surviving sparring sessions with the high-energy heavyweight is tough enough. That's why those who are familiar with Velasquez's pace say it could be the difference-maker in the UFC on FOX bout with Junior dos Santos -- especially if the fight makes it to the later rounds.

Regardless of what effect it might have on the fight, at least dos Santos knows what an important variable it could be. He said on Thursday that, in his opinion, "the best of Cain Velasquez for sure is cardio."

"He's got amazing stamina for this division, and for sure he's like those unstoppable guys," said dos Santos. "That's going to be my challenge, is to stop him."

But then, dos Santos hasn't exactly had a ton of experience against fighters like Velasquez. He's only gone the distance twice in his career, and both those opponents -- first Roy Nelson and then Shane Carwin -- slowed down considerably after dos Santos battered them with strikes early on.

"When you can step back and shake your arms out, it helps in terms of your cardio," said Cormier. "When Junior was fighting Shane, he could dictate the pace and if he felt tired he could take a little break, but Cain won't ever let him do it. If he steps back, Cain will come forward."

As Velasquez told reporters, he's looking for "a long, grueling fight." If it's long and action-packed, the UFC probably wouldn't mind it either. The longer the fight goes, the more chance there is for fans to pass the word along via Twitter or other social networking outlets, lifting ratings as the bout wears on.

But for Velasquez, who credited his opponent with having "good cardio, especially for a heavyweight," it's more about turning the fight into the kind of grind that has historically favored the wrestler's skill set over the boxer's.

"I think with anybody else I've competed against, I don't think anybody's been able to match my cardio," Velasquez said.

He won't get any argument from Cormier, who's gone against some of the best in the world in one of the most demanding cardiovascular sports out there.

"I'm in good shape, I fight at a high pace myself, and nobody wears me out," he said. "But when we train, I get tired. I'm like, what the hell? I know I'm in shape. But it's something about the intensity of having him always in your face."

In a fight that's scheduled for five rounds, even though very few people expect it to last that long, it's that lasting intensity that could make all the difference. If, that is, both of them are still conscious to hear the words, 'Round two.'