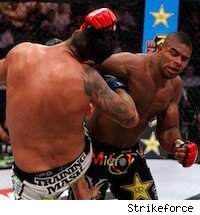 Alistair Overeem's former management team has thrown a counterpunch at the current UFC fighter, alleging that he owes them money from their work and slamming his lawsuit as "scurrilous."

A statement released to MMA Fighting by Roderick J. Lindblom, legal counsel for Knock Out Investments (KOI) and Golden Glory -- Overeem's former management team -- claims that Overeem filed his lawsuit as a preemptive action after KOI informed him of numerous violations of their deal, including his failure to pay commissions for past fights and endorsement deals.

"KOI and Golden Glory are respected organizations committed to securing the best fight deals and training for their team of fighters," the statement read. "Mr. Overeem's continued suggestions to the contrary are scurrilous and will be vigorously defended in the proper forum."

On Thursday, MMA Fighting also obtained a copy of Overeem's lawsuit, which was filed in California Superior Court. The 10-page complaint characterizes his management contract, which was signed in July 2007 and scheduled to run for five years, as "exceedingly one-sided," and claims that KOI and Golden Glory "failed to provide the required management services and have failed to pay Overeem monies that are now due and owing."

Among the breaches alleged by Overeem is failure to review, properly negotiate and advise him of his fight contracts, pressuring him to sign contracts that were not always in his best interest, failing to look after his best interests, and failure to remit payments of fight purses and other payments, among others.

He also charges that they engaged in deceptive practices to conceal income from him. By virtue of their actions, he alleges that he is owed over $151,000. He is also asking the court to terminate his management deal and determine any future rights of compensation.

Lindblom's statement says the management team is in receipt of his lawsuit and currently assessing all available defenses and counterclaims.

"Alistair Overeem is a striker -- he wants to throw the first punch. But this misguided decision to file a lawsuit as a preemptive strike leaves Mr. Overeem vulnerable in ways our clients wished to avoid," the statement closes out.