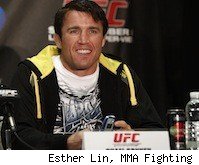 UFC president Dana White talked Wednesday on The Jim Rome Show about the inevitability of Sonnen vs. Silva 2.

"It's the fight that everyone wants to see," said White. "People want to see Chael vs. Anderson. Anderson is in this position where he feels like this guy is so disrespectful he doesn't want to give him a shot and everything else. But Anderson will end up fighting Chael Sonnen."
Sonnen last month returned to action with a submission win over Brian Stann at UFC 136. After the fight, Sonnen ignored Joe Rogan's first question to immediately go on the attack against Silva.

"Anderson Silva, you absolutely suck," Sonnen told Rogan. "Super Bowl weekend, the biggest rematch in the history of the business. I'm calling you out, but we're upping the stakes. If I beat you, you leave the division. You beat me, I will leave the UFC forever."

Sonnen has since called off the bet, saying the offer had an expiration date.

"That offer was good when I made it, but it's like any offer, they got to expire," Sonnen told Rome 10 days after the fight. "Apparently, that didn't work. I'm doing anything I can to lure him out and yes, I would have absolutely done that."

There's no target date yet for a rematch as Silva is currently out with a shoulder injury.
Silva's former training partner Mark Munoz threw his name in the hat last Saturday at UFC 138 by asking for a title shot against Silva, but it's now clear that Munoz will have to wait.