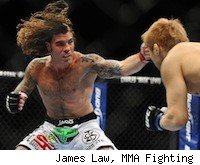 LOS ANGELES -- When Clay Guida arrived at Wednesday afternoon's UFC on FOX press conference, there was an empty chair and a card with his name on it waiting for him on the dais. By the time the press conference got underway, there was neither.

"They had spaces and then they realized, oh wait, they're not showing our fight [on FOX] so why would we be up there?" said Guida. "I understand, but old duder could have been hanging out at the hotel, sitting by the pool or something."

If you're waiting to hear Guida complain about his lot in life, that's about as close as you'll get. Clad in shorts and a hoodie and looking more like he was ready for a day at the beach on this warm fall afternoon, Guida's laid-back attitude fit right in with his southern California surroundings. If there's any fighter in the UFC who could look so relaxed about not only being left off the historic FOX debut, but also about being pulled out of his hotel to stand around in the L.A. sun for no reason, clearly it was the duder.

When you really stop and think about it though, it's hard to fathom how even Guida could not be seething with a certain quiet rage on this particular afternoon. Here he was, a few days away from a top contender bout with Ben Henderson -- the kind of fight that can make or break a nearly 30-year-old fighter's career -- and he was being treated like the kid who'd showed up to the dance without a date.

In a way, being on the first UFC on FOX card makes him a part of history, but being relegated to the internet stream and the Spanish-language broadcast also makes him more of background player to that history than a living participant.

But instead of brooding in a corner while Cain Velasquez and Junior dos Santos soaked up the media attention, Guida sat in the front rows, snapping his own photos like one of the fans. He wasn't interesting in griping about what he'd missed out on, he explained afterward, but rather focusing on where he still had to go.

"I'm not necessarily disappointed, more determined now," said Guida. "Life has kind of come full circle and my MMA career has come full circle. Five years ago I was on the undercard of UFC 64, just trying to win my fight and get put on the broadcast. This one, hopefully there's a chance, but they're going to put it on FoxSports.com, Facebook, you know."

In other words, people will see his fight, even if it's just the hardcores. And Guida is confident that the bout will eventually find its way onto the airwaves, since "Dana [White] is a magician. ...He will do his best to get it on TV."

Of course, by the time the bout does air for English-speaking American viewers, there's always the chance that Guida won't like what they see. Some oddsmakers have Henderson as a nearly 3-1 favorite, and if Guida loses this chance to position himself as a lightweight title challenger, he may never get another one.

After all, his current four-fight win streak has been almost two years in the making, and he hasn't faltered since his submission loss to Kenny Florian at UFC 107 -- an experience that stays with him to this day, he said.

"I still use the Kenny Florian fight as motivation," Guida said. "I thank him every day in my training for teaching me a lesson, unfortunately. I was trying to strike with a striker, but now I've learned to go back to my roots and that's hard work and wrestling."

It's hard to argue that Guida has made the most of those two attributes in recent fights, but will it be enough against Henderson? Not surprisingly, Guida doesn't seem to be stressing himself out over it at the moment.

"Patience is part of being a professional athlete," he said. "Five years seems like a long time, but to me it seems like I was just stepping in the cage on Oct. 14, 2006. To me it's about the journey, not just the destination."