As Hype Increases for UFC on FOX Fight, So Do Risks for Cain Velasquez 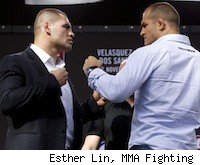 LOS ANGELES -- UFC president Dana White has made no secret of what he's hoping to see when Cain Velasquez and Junior dos Santos climb in the cage for the first UFC on FOX fight this Saturday night.

In other words, a cross between Griffin-Bonnar I and Hagler-Hearns might be acceptable. Anything less and it will feel like a disappointment.

But projecting such enormous expectations onto the fight could have unforeseen consequences, especially if the fighters feel an obligation to deliver a certain kind of fight in order to please their boss and make a good impression on the network TV audience.

Some segment of the viewing public might like to see the fight become a wild brawl, but that seems like an outcome that would benefit the precision striker dos Santos much more than the former All-American wrestler Velasquez. It's not hard to imagine the champ leaving his game plan in the locker room in an attempt to deliver what White has promised, and if he does he could be looking at a fight that doesn't necessarily play to his strengths.

If Velasquez's camp is worried about the effect of the pressure of their fighter, however, they won't admit it. But that doesn't mean they recognize the danger.

"If they go out there and go crazy, it probably will be to [dos Santos'] advantage, because I think Cain has more skills than he does," said AKA teammate and sparring partner Daniel Cormier. "...But Cain could fight the strategy that's been laid out for him on cruise control. That's the best thing about being at AKA, is we emphasize strategy and how we're going to fight and our game plan and we follow it every day of the week in training. It's not like you're going to spar however you want. You spar according to the game plan that [head trainer Javier Mendez] sets out in front of us. You don't abandon it."

Undoubtedly Velasquez will benefit from having the experience of his trainers and teammates behind him, but at the same time, has any of them ever been in a fight of this magnitude? Are they fully prepared for what it might do to their fighter's mind to have White promising a war whether Velasquez's game plan calls for it or not?

According to Mendez, the team isn't relying on Velasquez's ability to block out the hype so much as his ability to deliver on it without changing anything about his fighting style.

"Cain's going to come in and if Junior can be mauled right away, I'm sure Cain will maul him right away," said Mendez. "But Cain's never put on a boring fight because he's constant action, he doesn't stall, doesn't hold. He's a chain-type fighter. He's always looking to do the most damage and get you out of there as fast as possible, so I can guarantee you this fight will be the most exciting fight in the heavyweight division. There's no way this fight will be boring. I'd bet my life on it."

Still, it's an awful lot to ask for from any fighter, particularly one who's been out of action for a little over a year. Velasquez suffered a torn rotator cuff in victory over Brock Lesnar to claim the title last October, and had surgery to repair the injured shoulder in January.

The road back wasn't an easy one for the champ, who slipped out of fighting shape when he couldn't train like he'd become accustomed to.

"He got big," chuckled Cormier. "I don't know how heavy he got, but he got big. I used to give him a hard time, calling him Mark Hunt. He didn't like that very much."

According to Mendez, it took about a month of gradually getting Velasquez back into good condition before they could begin the real work.

"In the beginning it was hard," Mendez said. "I was having him just do footwork stuff and he was so out of shape, he got tired just doing footwork. He had a callous on the bottom of his foot and he ripped it so I had to have him stop. It went from that to where he is now, which is pretty amazing."

But even as Velasquez and dos Santos both swear that they've barely noticed the added pressure for this fight, those around them certainly have.

"It's bigger," said Cormier. "It means a lot more. But I think those guys are trained to ignore it, and that's good. When you're in the fight, whether it's on FOX or on Spike or in a damn garage somewhere, you have to focus on the fight. That's really all that matters. But for everyone else around, we know it's bigger. You can feel that it means so much for the sport. If they go out and lay an egg, it's not going to be good."

Even Mendez, who initially insisted that it felt like any other fight, had to stop himself and admit, "well, you know, actually I'm probably lying about that."

There's no use in denying it: this is a different kind of fight. If Velasquez and dos Santos didn't know it already, they found out when they showed up to the presser and White started making promises and guarantees on their behalf.

"Give me my entire roster of guys, make every one of them healthy, and this is still the fight I'd pick," said White. "This is the fight that I picked to put on network television, and it is important, and I picked this fight for a reason."

With the bar set that high, it would be easy to get a reckless while trying to reach it.