UFC Not the First on Network TV, but Can It Learn From Others' Mistakes? 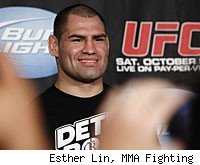 Make no mistake: the UFC on Fox is a landmark event, and it is a very, very big deal for the UFC and its fans. But it's not quite an industry pioneer. Not by a long shot.

A live MMA event on network TV? Sorry UFC, but it's been done. Not particularly well, but still.

Before there was the UFC on FOX, there was EliteXC: Primetime. Before Cain Velasquez and Junior dos Santos agreed to meet for the UFC heavyweight title on network TV, Kimbo Slice and James Thompson introduced America to their own interpretation of MMA on CBS. Like many trailblazing efforts in other fields, this was an imperfect foray into the unknown. Let's just say mistakes were made, lessons were learned, and both EliteXC and CBS found out that sometimes it hurts to go first.

This was late May, 2008. Compared to today's MMA landscape, the field of battle was positively littered with would-be competitors to the UFC. The IFL had a pre-taped weekly spot on MyNetworkTV -- at the time one of the consistently lowest-rated English-language networks -- airing weeks-old fights and highlight reels. Strikeforce had a similarly pre-taped, extremely late-night (or, more accurately, early morning) show on NBC at 2 a.m., following "Poker After Dark." Even clothier-turned-promoter Affliction was getting ready to jump into the MMA scene with a bloated payroll and a recklessly ambitious business plan.

And then there was EliteXC. First announced in 2006, the upstart organization put on its first fight in 2007 at the DeSoto Civic Center in Southaven, Miss. It wasn't the most auspicious of beginnings, particularly for an event entitled "Destiny" -- the main event ended in a disqualification loss for Frank Shamrock after he illegally kneed Renzo Gracie in the head several times -- but with a main card on Showtime and an undercard streaming on Pro Elite website, it was perhaps a sign of things to come for the MMA industry as a whole.

On May 31, 2008, EliteXC brought a live MMA event to primetime network television for the first time in American TV history. The aptly named "Primetime" event went down in Newark's Prudential Center, and was loaded with EliteXC's most marketable stars, including Kimbo Slice, Gina Carano, Robbie Lawler, and Phil Baroni.

From the very beginning, the big network debut wasn't exactly a Swiss watch. Carano missed weight badly for her fight with Kaitlin Young, and didn't seem especially thrilled about being on the card at all. The event was headlined by former internet brawler Kimbo Slice (who had just two pro MMA fights at the time) taking on journeyman heavyweight James Thompson (who was riding a two-fight losing streak and had been knocked out in five of his last eight bouts).

The main event pairing was panned by many fans and pundits, particularly since the undercard featured a legitimately attemtion-worthy middleweight title bout between Robbie Lawler and Scott Smith, but the rationale behind it seemed obvious enough. Here was Slice, an internet novelty act who had sprang into a sudden, bizarre form of fame capable only in the age of the internet, taking on a Brit with a glass jaw who at least looked the part to people who didn't know better. Slice would knock him out in front of millions of new viewers, all of whom would be instantly hooked on this new-fangled MMA stuff, and CBS and EliteXC would both scoop up their enormous piles of money and go home.

As you probably already know, it didn't go down like that.

The good news was, the millions of viewers showed up. The bad news was what they saw when they got there. Dancing girls, some not quite primetime-worthy performances, and, strangely, not all that much action. As Yahoo! columnist Kevin Iole pointed out later, "after the show had been on the air for 32 minutes, there had been 61 seconds of actual fighting. When it was 70 minutes into the show, there had been just 2:12 of fighting."

CBS would have reason to regret that, since the Slice-Thompson main event didn't even get underway until well after the show was scheduled to end. By the time the sloppy heavyweight affair finally ended -- and with a highly questionable stoppage that gave Slice the victory, no less -- EliteXC had run over by nearly an hour in its network debut. It also hadn't made too many friends.

Newspaper columnists and radio hosts around the country heaped various amounts of scorn on CBS for airing the spectacle. Even then-governor of New York David Paterson admitted to listening to the broadcast over the radio, though he was apparently unimpressed with descriptions of Thompson's cauliflower ear popping as a result of a Slice punch. Perhaps least surprisingly, UFC president Dana White slammed the effort as "disgusting."

Said White: "You can hate me, you can say whatever you want about me. I've been busting my ass for the last ten years in this sport, and there's a lot of great athletes in this sport...and last night was a [expletive] joke. Did it set us back? I don't know. I did Sportscenter today, where some guy's saying this stuff shouldn't even be on television. I agree. What happened last night should not be on [expletive] television, especially network television. But you can't say that about the real fighters in this sport."

Of course, that wasn't the death knell for MMA on network TV or even for EliteXC on CBS. On went the show(s), and America hadn't yet seen the last of Kimbo Slice. It's worth noting that then, just as now, the MMA community had high hopes for what network exposure might help the sport accomplish. The Baltimore Sun's Mark Chalifoux said it would be a "moment of truth" for EliteXC and MMA, writing that the "entire MMA-world has a lot riding on this event as it will be the first exposure to MMA for a lot of casual sports fans."

EliteXC promoter Gary Shaw promised it would be "the biggest thing ever to happen to MMA." After "Primetime" on CBS, Shaw said, fighters would be as big as American Idol contestants. "They'll be recognized at airports and Burger Kings," he added.

Somehow, I doubt that if James Thompson walked into a Burger King right now his biggest problem would be fending off autograph-seekers.

So what's different for the UFC's debut on FOX? In short, everything. Better fighters, probably better production values, and much better pre-fight promotion. While CBS seemed tepid in its support of MMA both with EliteXC and later with Strikeforce, FOX has already thrown its weight behind the UFC, plugging the Velasquez-dos Santos fight on NFL games and World Series broadcasts. If you were eating wings and watching the Packers beat the Chargers on Sunday, there's simply no way you didn't catch at least a half-dozen promos for the UFC on FOX.

This event also has simplicity on its side. With just one fight to get done inside of one hour, running long won't be an issue, nor will an overburdened slate that asks new viewers to try and differentiate between multiple fighters and weight classes.

If EliteXC's network debut was a three-hour variety act designed to introduce new fans to the sport, the UFC's first FOX outing is more like a band showing up to play its hit single and then getting back on the tour bus. Whether it will leave fans wanting more or simply leave them confused and/or disinterested remains to be seen, and a lot depends on whether Velasquez and dos Santos can live up to the hype and the pressure.

At least the UFC chose its fighters based on skill rather than fame. At least it has a partner that really believes in it enough to want to put its name on the product all the time, rather than only when it's convenient. At least it has the experience to pull something like this off, and the promotional savvy to do it right. The UFC might not be the first to make the leap to network TV, but it could still be the best.