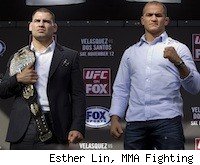 Los Angeles -- Despite the magnitude of the UFC on FOX event this Saturday night in Anaheim, UFC president Dana White kept it simple and direct at Wednesday afternoon's press conference to promote the show. No supporting cast. No big procession to mark the big occasion. Just the two people who mattered, and the one man willing to shout from the rooftops about how important it all is.

Right across the street from the Staples Center in downtown L.A., walled in by the trendy bars and restaurants of the L.A. Live complex, White stood flanked by a couple of men whose dented faces and misshapen ears were enough to tell you that they hadn't come down here for a screen test, and squinted into the sun as he declared that what we were looking at was the ingredients for "without a doubt, the biggest fight in UFC history."

At least, that's what he's hoping for. It's what he's betting on, and why, White said, he chose heavyweight champ Cain Velasquez and Junior dos Santos to lead the charge in the UFC's network TV debut.

"If you're in this position where it is the biggest fight in UFC history, the biggest moment for the sport of mixed martial arts, these are the two guys you want to step in there and go out and fight," said White.

Of course, while Velasquez and dos Santos might make for a great pairing in the cage, they don't seem to be the UFC's best and brightest when it comes to selling a fight. Maybe it's that both are just too easy-going, too agreeable. Neither is known as a man of many words, and both are too respectful to reach into the pro wrestling bag of tricks for snappy one-liners and stinging insults.

Even when dos Santos was reminded during the presser that he once suggested that the champion in any given weight class isn't necessarily the best fighter in that division, he owned up to the remark before quickly adding that "in this case," Velasquez is the current top dog at heavyweight, "but I'm going to change this on Saturday."

For his part, Velasquez was bolstered by the support of the Hispanic fans who had come out for the event, drawing cheers when he thanked "La Raza" for their support, but mostly relying on White to play up that angle for him in typical fight promoter fashion.

After running down the bullet points of Velasquez rise to stardom, White called his heavyweight champ "a testament to the American dream...where somebody can go out there and work hard and focus and he really is that story. I don't care if you're Mexican, American, German, or Puerto Rican, man, I don't know how you can't love Cain Velasquez and his story."

Not that dos Santos was without his supporters, however. Even after it was suggested to him that he might find himself in unfriendly territory inside the Honda Center, small, but passionate chants of "Cigano! Cigano!" broke out among a few fans.

A question from one enthusiastic fan about which hand dos Santos planned to knock the champ out with drew boos from the mostly pro-Velasquez crowd, but merely seemed to confuse dos Santos at first, before he replied, "I have two hands for a reason...but I like this one," as he held up his right.

Another fan told Velasquez that his achievements made him proud to be Mexican, which seemed genuinely touching before he quickly followed it up with a slightly unreasonable request to walk to the cage with the champ's entourage on Saturday night.

"I don't think we can do that," said a visibly uncomfortable Velasquez.

But White, who'd already agreed to give another fan tickets to the promotion's upcoming Toronto event immediately after telling fans not to ask him for tickets, dismissed such practical concerns easily.

Maybe it was the sunshine getting to the UFC president. Maybe he's just feeling so good about the upcoming network debut, he's become a soft touch for increasingly demanding fans. Or maybe sometimes all you have to do is ask and the rest takes care of itself.

As for White, he's already made clear what he's hoping for out of Velasquez and dos Santos when FOX pulls back the curtain on Saturday night. Whether he too will get what he wants remains to be seen.