Anderson Silva Miffed Over Mark Munoz's Challenge, but Story's Not Quite So Simple 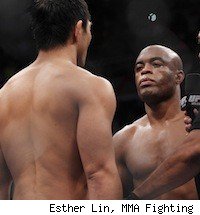 On the surface, it seems that Anderson Silva is a very sensitive fellow. Let's just examine the last couple years of drama so that we have this straight. Silva was upset at Vitor Belfort's "betrayal" for accepting a fight with him. He was incensed by Demian Maia for some supposedly offensive comments. He thinks Chael Sonnen is the most disrespectful guy in the sport. And now, he seems a bit angered that Mark Munoz is interested in fighting him.

During a recent media day with Brazil's Globo TV, Silva was asked about Munoz's post-UFC 138 request for a title fight with Silva. As callouts go, it was among the tamest we've seen. Just moments after his victory over Chris Leben, Munoz prefaced his appeal by calling Silva "by far the best pound-for-pound fighter" and then asking to face him. Silva responded that he had not seen it, but it was clear he was miffed.

Reading between the lines of a simple comment, Silva is suggesting betrayal with the insinuation that Munoz is no longer his friend. The two have spent time training together in the past, with Munoz shoring up the Spider's wrestling, and the UFC middleweight champ helping to tighten up Munoz's striking. They've worked and sweat together, and in Silva's mind, that bond should not be broken by the possibility of a payday.


Easy for him to say. Silva has earned big money and big fame, but if he were on the outside looking in, with a friend looking down and wagging a finger in his face at his hopes and aspirations, he might not feel quite the same way.

That's the simple way of looking at this. But there is another way.

Michael Jordan was inducted into the Basketball Hall of Fame in 2009. During his 22-minute acceptance speech -- usually a celebration of achievement -- Jordan verbally lashed the doubters, haters and foes that he'd already conquered years before. He derided the coach that had famously cut him from his high school team, players, executives, media, anyone who he felt had wronged or underrated him during his career.

The speech was panned as mean-spirited and cruel, but it was certainly a window into Jordan's ultra-competitive nature. If you gave him a reason -- or even if you didn't but he needed to invent one -- Jordan would find a way to resent you, and use that as motivation to push himself towards greatness.

I suspect this is the same phenomenon we're seeing with Silva, who by the time he is done with his career, may retire as this sport's MJ.

The greatest operate on a level most of us can never truly understand. The drive, determination and motivation to push themselves to a level that few possess comes from within, and is often powered by what we'll call "alternative fuel sources." It's not simply about proving you're the best, it's about shutting up the challengers and making believers out of the skeptics.

There is a story about Silva stemming from his 2006 knockout of Tony Fryklund, the fight that led to his signing by the UFC, that is telling in that regard.

Silva has told the story a couple of times about the fact that he saw the knockout strike -- a reverse uppercut elbow -- in a movie, and decided to add it into his arsenal. For weeks leading up to the fight, he practiced it hundreds of times a day in hopes of perfecting it. But in his telling, he adds in the detail that those around him warned him and pleaded with him against using it. His wife told him he would get knocked out. His trainer and one of his close friends advised him that it had no chance of working. Despite the protestations -- or more likely, because of them -- Silva could not keep himself from trying it and proving them wrong. The way he tells the story, he closes it out by reminding everyone, "And yes, it ended up working."

Some of sport's greats have to invent personal wars to drive them forward. Just the same way Jordan's legendary competitive streak fueled him to out-work the NBA's best, Silva sees conflict where there isn't any as a means of motivation. That's why he came into the Belfort fight with a sneer, why he toyed with Maia, why he can't bring himself to dignify Sonnen's challenge, and even why he feels offended when an acquaintance wants to fight him.

To Silva, a fight isn't a simple sporting contest, it is a challenge of personal wills. Whenever anyone says or does anything to threaten his, an alarm bell goes off in his head. Statements get filed away for future reference, and maybe even reinterpreted to be something they are not. On the surface, it seems like he's simply sensitive, but this is the way he sees things. This is the way he's reached this level. Any perceived slight is a reason to train harder. Any real insult is a declaration of war.

Munoz may try to explain himself and offer a rational, reasoned case for facing his friend, but as long as he wants the fight, it will be an exercise in futility. Silva will feel the same way. To us, Munoz is just a guy hoping to reach his full potential. But to Silva, he has committed a personal betrayal of the highest order. He is a friend turned foe. Whether right or wrong, his perception becomes his reality, and motivation appears where before there was none. Welcome to the "Spider's" web.