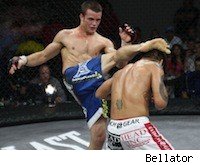 A hand injury has forced Patricio "Pitbull" Freire to undergo surgery, scuttling plans for his Bellator featherweight title shot against Joe Warren. So instead, Bellator will go to plan B.

By virtue of his recent 2011 Summer Series featherweight tournament win, Pat Curran was next in line after Freire, but now he's been bumped ahead with Freire on the shelf, and Curran will face off with Warren at an early 2012 event.

The promotion confirmed the bout on Tuesday, but has not yet finalized an exact date for the title fight.

This will be Curran's second shot at a Bellator championship. In 2010, he won a lightweight tournament and advanced to face reigning champ Eddie Alvarez, but lost a unanimous decision. Afterward, he dropped to featherweight and impressed during his three fights through the bracket, defeating Luis Palomino via submission, Ronnie Mann by decision, and then stopping pre-tournament favorite Marlon Sandro in a second-round knockout.

Warren (7-2) recently attempted to become a two-division champion in Bellator, hoping to add a bantamweight belt to his collection, but in a first-round fight with Alexis Vila, he was knocked out in just 64 seconds. He previously won the 145-pound belt in September 2010 with a KO of Joe Soto. This will be his first title defense.

Freire (17-1), who won a season four featherweight tournament, will eventually take on the winner of Curran-Warren. The promotion confirmed that Freire's surgery was expected to keep him out of the gym for three months.