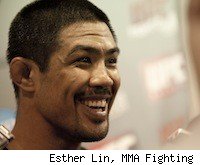 Even in the frantic excitement of victory, Mark Munoz held true to his gentlemanly reputation. The rapidly improving middleweight who fights under the beastly nickname of "The Filipino Wrecking Machine" beat Chris Leben up at UFC 138, then toned things down with a polite request to cut the line and face champion Anderson Silva.

With a potential big-money Silva vs. Chael Sonnen rematch already in discussions, Munoz's wish seems unlikely to be granted, but at least he's planted the bug in people's minds that he's title-worthy. Munoz has won seven of his last eight, brings a go-for-broke style and has surrounded himself with an excellent team from which to learn. After some troubles during the early stages of his UFC fight career, things seem to have clicked for him.

Munoz certainly deserves credit for his improvement and his willingness to fight Silva, who is a former training partner. His "call-out" though, could use some work. Calling Silva "by far" the best pound-for-pound fighter alive, Munoz politely requested the honor of Silva's presence at a title bout. The well-mannered plea was completely contradictory from the fighter who ran over Leben moments before. The saying is that nice guys finish last. Munoz certainly has the chance to prove that wrong.

Mark Munoz
It simply wouldn't make sense for the UFC to scuttle the Silva-Sonnen rematch, particularly with all the buildup Sonnen's already produced for it. Munoz and the rest of the division need to bide their time until that plays out. Unfortunately for Munoz, that means at least one more fight before he can compete for the belt.

On December 3, Michael Bisping and Jason "Mayhem" Miller are fighting. If Bisping wins, a Munoz-Bisping matchup should be signed as a No. 1 contenders fight. If he loses, well, then, we're in a bit of a pickle.

Prediction: Munoz eventually faces Bisping with a title shot on the line.

Chris Leben
The loss had to sting for Leben, who sees himself as one of the UFC's toughest fighters but could not survive Munoz's offensive onslaught. Fighters can often reason away a knockout in their minds by rationalizing that they simply got caught; it's not so easy when things go the way they did on Saturday, and you're brought to admit you got beat up by a better fighter.

Given Leben's exciting style, there is certainly still a place for him in the UFC, it's just not among the top five, at least not right now. At 31 years old and with a series of wars behind him, that possibility is certainly beginning to fade. Regardless of that, he'll certainly always be remembered as a warrior in the cage, and given his style, you almost wonder if that reputation is as welcome to him as the description of champion might be.

Prediction: Ed Herman has won two straight since returning. Leben might be a good test in determining what level he's at.

Renan Barao
Barao's performance should have served as an eye-opener for those who hadn't seem him fight before. He looked aggressive on his feet, continued his reputation as a killer on the ground, and closed out the durable Brad Pickett inside of one round despite being on enemy territory.

That win was great news for the UFC, who needs someone, anyone to make a statement at bantamweight and present themselves as a fresh, credible challenge to champion Dominick Cruz. With his win, Barao fit that bill. Will he be immediately thrust into the title picture? It really wouldn't be hard to sell him as a legitimate threat coming off this win and highlighting his 28-fight unbeaten streak. But my guess is that he'll need one more victory before he gets to Cruz.

Thiago Alves
The former No. 1 welterweight contender faced a must-win against Papy Abedi, and delivered with a first-round rear naked choke submission, his first finish since a TKO victory against Matt Hughes in June 2008. Given the fact that he was facing a relatively unknown opponent and was one of the best-known fighters on the card, anything else would have been a major disaster for Alves.

He faces a lengthy climb to return to contention, but at 28 years old, it's not an impossible mission. There are also plenty of good opponents to match him up against.

Anthony Perosh
It's two straight wins for the Aussie since returning to his natural home at light-heavyweight. At 39 years old, though, it's hard to believe Perosh has any realistic shot at climbing the ladder towards the top of an extremely deep division. Even worse for his future prospects is that division is cluttered by wrestlers. Given Perosh's jiu-jitsu based style, those types of matchups will be tough to navigate.

That said, he deserves plenty of credit for these recent wins, as well as the chance to try his skills against an opponent with a different type of skill set next time out.

Terry Etim
Etim spent 19 months on the sidelines injured and then spent 17 seconds in the cage upon his return with a lightning-fast submission against the overmatched Eddie Faaloloto. While the speed of the victory was unexpected, Etim was the biggest favorite on the entire card, so it was a fight he was supposed to win impressively. Things shouldn't be quite so easy for him next time around.

Prediction: Thiago Tavares is still waiting for a matchup after his August win over Spencer Fisher. That sounds interesting. The UFC though went a different route, matching him up with Edson Barboza at UFC 142.

Che Mills
Mills debuted to some high marks after knocking out Chris Cope in a 40-second clinic of standup violence. UFC commentator Joe Rogan quickly anointed Mills as a fresh new welterweight star and he certainly looked the part, but we'll need to see more of him before we can put him on the must-watch prospect list. Until then, how about we match him up with another striking star?

Prediction: Mills vs. Duane Ludwig sounds like fireworks to me.