Despite Large Audience Expectations, UFC on FOX Debut Will Be Money Loser for UFC 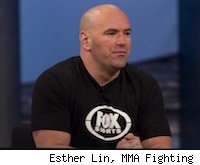 For months, UFC president Dana White has said that it is the only thing he cares about. His concentration on the UFC on FOX debut has bordered on obsession. You can understand his focus, as the event will potentially put his product before the eyes of millions who have never seen it before. The Cain Velasquez vs. Junior dos Santos matchup might draw the largest television audience in UFC history, but that is simply a guess. One thing we know for sure is that it will be a money loser.

The quest to get the UFC on primetime network TV had been a long-held goal for years for White, and an idea that stemmed from his youth. White could remember becoming a boxing fan while watching ABC's Wide World of Sports and realized that broad exposure was a logical route for expanding the UFC's fan base. For now, though it will be a costly one.

That is because the UFC budgets each event as though it is a stand-alone business. It has its own marketing and advertising budget, and revenue expectations.

According to Sports Business Daily, the UFC forecasted that if it was on pay-per-view, a Velasquez vs. dos Santos heavyweight title fight would have brought in about 800,000 pay-per-view buys.

The FOX deal is believed to pay the UFC an average of around $100 million annually, but some sources have indicated that the figure starts a bit lower than that average and increases each year over the length of the deal.

This show, however, is not part of that contract, negotiated independently and according to White, it is being written off as a loss-leader with an eye towards the future.

According to SBD, the UFC also reportedly had to dig into its pockets to pay Velasquez a bonus to offset the pay-per-view cut he lost when the company decided to feature him on free television.

It's not all bad news though. In addition to arena gate and merchandising revenue for the historic show, the FOX deal is expected to bring in new advertising dollars. Though usual sponsors like Dodge and Bud Light are likely to be the more prominent ones for the premiere, FOX executives have indicated that new sponsors will be on board for the first event in 2012.

With FOX's mainstream audience and ability to reach the target demographic of 18-34 year old males, the UFC sees the network as a driver for more explosive growth, the same way it helped push the rise of NASCAR. UFC chairman and CEO Lorenzo Fertitta told SBD that he believes the company could create 100,000 new pay-per-view buyers from the early exposure alone. So while the promotion expects the first event to be a short-term money-loser, they are banking on the belief that it will eventually increase the company's bottom line.

It's a strategic move that brings the product its widest exposure, with the hope that a fan-friendly platform turns into fan dollars.

"Our goal has always been to bring big, free fights back to network television," White said. "Now that we have a network deal, we're looking at it as, obviously we're going to take a hit on the pay-per-view side for a big fight like this, but we're thinking long-term for the future of the sport and making the sport bigger. That's why we're going to do it, and continue to do it."