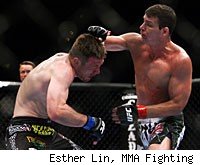 The Ultimate Fighter 4 finale fight card features Jason "Mayhem" Miller vs. Michael Bisping in a coach vs. coach matchup at the Pearl at the Palms Casino Resort in Las Vegas.

Mayhem (24-7) returns to the UFC after six-plus years fighting outside of the UFC in promotions such as Strikeforce, DREAM and Icon Sport. Mayhem hasn't fought this year, but won both his fights last year against Kazushi Sakuraba and Tim Stout. Bisping (21-3) is riding a three-fight win streak and last defeated Jorge Rivera at UFC 127 in February.

In addition to Mayhem-Bisping, the finale will also host this season's finals of the bantamweight and featherweight tournaments.

The completed TUF 14 Finale fight card is below.