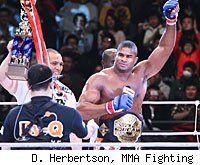 The MMA Hour is back in your life on Monday with another loaded two-hour show.

* Alistair Overeem will break major news about his career and discuss his UFC 141 fight against Brock Lesnar.

* Mark Munoz will talk about his recent win at UFC 138 and what's next for him.

* MMA Fighting's Mike Chiappetta and ESPN.com's Chuck Mindenhall will join us for another media roundtable to discuss all the comings and goings in the world of MMA and all the news coming out of UFC 138 and preview UFC on FOX 1.

* We will also address the future of MMAFighting.com and The MMA Hour with a guest to be announced on the show.

* Plus, we'll give away two sets of the Ultimate Fight Collection, 2011 Edition. It's a 20-disc DVD set that has over 40 hours of footage of UFC fights from July 2010-June 2011 and 10 hours of content never before available on DVD. It will go on sale exclusively at Best Buy on Tuesday, Nov. 8. It will go to the best calls of the day, and the winners have to be United States residents.

*** You can also stream the show live on your iPhone or iPad by clicking here.