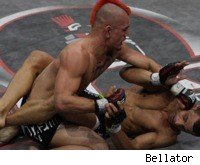 When Viacom purchased Bellator Fighting Championships, it was a strong sign that the promotion has a good chance to survive as America's No. 2 mixed martial arts promotion. Now Bellator is looking at expanding globally as well.

"I'm really trying to expand this brand into international markets," Bellator founder and CEO Bjorn Rebney told MMAFighting.com. "I've always believed since I started watching MMA that this sport was a very easy sport to grasp and understand -- the most basic level of sports competition -- one man vs. another man in a world class competition. So my vision has been building up enough presence domestically so we can start to expand internationally."

Toward that end, Bellator is announcing on Monday a deal with FremantleMedia Enterprises to represent its international TV distribution rights. FremantleMedia has operations in 22 countries and is involved in distributing nearly 10,000 hours of TV programming around the world every year.

"What this really means is we've got the foremost partner in the space out there helping us build this brand from an international perspective," Rebney said. "Domestically I've been clear that we've got the greatest domestic partner you could have from a television perspective. But now internationally we've got them looking to disseminate Bellator content into every single country."

Rebney said he thinks getting on TV channels around the world will help Bellator attract fans from outside North America, as well as compete for the best international MMA talent. He also said he can see Bellator doing international events in Brazil or Europe, although he said the logistics would be difficult to do an overseas show as one of Bellator's weekly seasonal events.

"We'll be able to really expand the power and breadth of the marketing machine," Rebney said. "We're three years old and have never done those things, but now that we have a partner like Fremantle we can start that development process. You'll see more Bellator licensed products, both domestically and internationally. You'll see more home entertainment, video on demand options in Bellator."

As you'd expect from a promoter, Rebney is bullish on what can be expected from Bellator going forward.

MMAFighting.com also caught up with Rebney for some other questions and answers regarding issues facing Bellator.

Michael David Smith: Ben Askren beat Jay Hieron in a very close split decision to retain the Bellator welterweight title. Would you consider booking an immediate rematch between the two of them?
Bjorn Rebney: I thought it was a great fight. The reason I went out and signed Jay Hieron was because I thought he was a world-class fighter who had never been given his shot. The key selling point I had with Jay was that if you come here you'll have a clear path to the title. He got it, he bought into it, Ben faced the best fighter he has faced thus far in his career. I thought Ben won the fight. I think the world of Jay Hieron and it would be my pleasure to have him back in another tournament and give him another shot at fighting either Ben Askren or the Ben Saunders-Douglas Lima winner, whoever of them might beat Ben Askren. But I don't give anyone a title shot. Guys earn a title shot in Bellator. So I'm not going to deviate from what's made Bellator unique, and that is that you earn it. Jay got super close, and it was a great fight, but the judges decided Ben won the fight, and if Jay wants another shot he'll come back and earn it.

Are you worried that the tournament format makes your champions too inactive? For instance, Eddie Alvarez likes to stay active, but he's only fought once this year and twice last year.
No, but I'm taking steps right now to increase the frequency of our world title defenses. If you look at other champions you see they typically will defend their titles twice in a year and we're in a position where champions defend their titles twice in a year, but I would like to increase that frequency. So I'm working with our partners at Spike on an adjustment to the format that will allow us to put more tournaments in each season -- not to change the tournaments, but to increase the number of tournaments so we can more regularly provide challengers who have earned the right to fight our champions. Of all the things we've done format wise, the only thing that wasn't as good as I wanted was the superfights. It wasn't an optimal situation in terms of how it should work in a perfect world, which is the guys should be defending their titles every time they step in the cage. That's what we're working on now.

Is Michael Chandler a good enough challenge for Alvarez? And what do you see in Alvarez's future?
I think Mike Chandler is a freak. He's an absolute monster. His maturation in the game, and his progression as a mixed martial artist, is more prolific than anyone I've seen over the last three years. He's a champion wrestler, who showed in his standup with Patricky Pitbull that he's a beast. He trains at an amazing camp with Randy Couture in Vegas and he's an absolute beast. I think Eddie is the best 155-pounder on earth but I think Chandler will be one of the toughest opponents of his career. People will be shocked at how competitive that fight will be.

Is Eddie Alvarez going to fight Shinya Aoki next?
It's signed to happen. The issue becomes what happens in Ed's fight with Mike. Contingent upon the outcome of that fight, it's scheduled to happen in the first quarter of 2012. The folks we're working with it at Dream say they're ready to move forward for it but we have to see how Ed does in his fight with Mike, although Ed losing his title to Mike wouldn't preclude him from fighting Aoki.

When will Season 6 start?
First quarter of 2012. We don't have a date yet, we'll take some time off after our last fight of this season on November 26 and then get ready to roll.

Which weight classes will you do in Season 6?
We'll definitely have 155, 145 for sure, probably 205 as well because our team has got some amazing signings at light heavyweight, and then we'll figure it out after that. The question is whether we'll do four, five or six tournaments next season.

What do you see as the future of women's MMA in Bellator?
It definitely has a future. It's definitely something we talk about, strategize on and plan for. We've got Jessica Aguilar fighting Lisa Ward coming up. I don't know if Season 6 will see a women's tournament but we'll definitely put women's fights together. Depth is an issue with eight-woman tournaments -- the depth across a weight class isn't one of women's MMA's strengths.