UFC 138 and the Trouble With Tape-Delay 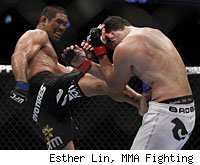 Well, I tried. I did my best to honor the sanctity of tape delay, to make it an entire day without spoilers so I could sit down to watch UFC 138 on Saturday night as if it was a live event. In my hubris, I thought it would be easy. I thought I could, through sheer force of will, make the Spike TV tape delay a non-issue. I thought I'd be able to enjoy UFC 138 like it was any other event. I was so, so wrong.

I didn't go into this without a plan. I knew the internet would be a minefield, and that if I so much as opened my web browser my homepage (MMAFighting.com, naturally) would spoil it for me.

Twitter was totally out of the question. Facebook? I have way too many British and European fight fans as friends. Since the entire world seemed to be getting the event live, I knew I'd have to avoid entirely the very medium that connected me to the world.

And I did it. I watched the Facebook prelims, and then I resolved to shut my laptop until the Spike broadcast started some five hours later. Thus disconnected, I thought I was home free. Then my phone buzzed with a text message from a friend. I should have thought twice before checking it, but habit got the better of me. That's about when my day was ruined.

So there it was. Now I knew, and I could not un-know. I still had to wait a couple hours for the broadcast on Spike TV, when I would tweet along with the action for the other sad sacks who were seeing it for the first time on tape delay, but I admit that I felt like the one kid in the neighborhood who was still clinging to a hollow belief in Santa Claus.

The weird part was, only the main event had been spoiled for me. I still didn't know what happened in the Brad Pickett-Renan Barao fight. I'd even maintained an impressive degree of ignorance with regards to the fate of Thiago Alves. So why couldn't I enjoy it as if it was live?

Maybe it was just the fact that other people knew. Maybe it was that half the fun of watching fights is the idea that anything can happen, and none of us can know for sure how it will end. Unless, that is, some of us get to watch it live while others get tortured by the same few commercials on Spike TV hours after the fact.

Over the years, I've gotten up ridiculously early and stayed up ridiculously late to watch live MMA events on foreign soil. Neither is especially fun, but I've come to the conclusion that it's better to be a zombie for the rest of the day and get your results as they come in rather than be well rested and intentionally ignorant.

And sure, you could argue that no one can complain about seeing the event a little late as long as it's on free TV, but stay with that reasoning and see where it goes. If Spike TV showed UFC 138 the following day, is it worth complaining about then? How about a week later?

As the difficulty in avoiding real-time results tells us, we live in the age of instant information. The UFC knows it, as does Spike TV. So why go through the sad charade of tape-delayed events? Wouldn't it be better to broadcast live to an interested audience in the afternoon than to a ghost town in the evening?

Maybe the boxing fans of 80 years ago could wait weeks to see the moving pictures of a fight, but they didn't have Twitter. They didn't have "friends" who would text them unsolicited live commentary. Instead they had polio and fireside chats. All things considered, I'd rather live in our age than theirs. I'd also rather watch my MMA live, no matter what time of day it is, than get a warmed-over broadcast in primetime.