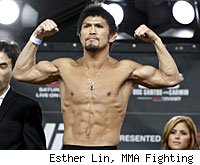 This is the UFC 138 undercard live blog for the five non-televised bouts in support of UFC 138 in Birmingham, England.

Round 1: Big Dan Miragliotta is your referee, towering over the bantamweights as we start the action. Lee lands a head kick as Cariaso ducks low for the takedown. Cariaso doggedly holds on, giving himself a few moments to recover. Lee takes him down from a clinch 1:30 into the round. Lee lands a hard right, then hunts a guillotine from the top, but it's not tight enough. Cariaso manages to get back to his feet. Lee is bullying Cariaso around from the clinch, and he trips Cariaso down again. Cariaso defends well but it's clearly Lee's round, 10-9.

Round 2: The duo exchange leg kicks early. Cariaso lands a left hand and Lee flashes a pair of kicks at him, then takes him down. Lee really wants the guillotine, he looks for it at every turn. Cariaso scored with a hard elbow from the standing position. Lee checked to see if he was bleeding, but he's not. Cariaso turned the tables with a takedown of his own midway through. Lee was active from the bottom, but Cariaso managed to earn mount with more than 90 seconds left. Lee took no damage and quickly scrambled back to guard. Cariaso spent the rest of the round on top, landing few strikes, but he still did enough to earn the 10-9.

Round 3: Lots of clinch work in the first 90 seconds of the round as the pair fight to achieve the offensive position. They're broken up, and Lee looks for the takedown. This time, Cariaso defends it. Moments later, he ducks low and puts Lee on his back. That could win him the fight.. He moves to side control, the mount. Cariaso with a right hand. Lee gives his back, and Cariaso goes for the choke. Nothing doing there. Back to full mount. Cariaso thinks about an arm triangle, but instead keeps his top position and rains down punches and elbows from the top. Lee can't escape, and Cariaso dominates to the final horn, so it's his round 10-9.

Round 1: Mills is walking forward, unafraid. He tags Cope with a right, then drops him with a left knee to the head. The ref looks close to stopping it but doesn't. Mills swarms and drops bombs. He drops Cope again with another knee and this time, it's over. That's how you make a debut.

Round 1: Omigawa tried an early takedown but Young resisted it. Young fired off a head kick that slipped past Omigawa's head. Young peppered the legs with kicks. Young is very light on his feet and looking to control angles. Omigawa initiates a clinch, and trips Young down. Young works his way up and aggressively fires off a knee to the head. Omigawa backs off and they reset. Young lands a headkick. Omigawa wants a grind, Young wants space. Young's fast hands score, and he takes Omigawa down late. Omigawa threatens with a guillotine and ends on top, but it's Young's round, 10-9.

Round 2: Young has some swelling on his right eye, apparently from a head clash. Omigawa takes him down early. He worked to side control and thought about a kimura but Young craftily avoided it, then reversed the position and got back to his feet. Young let his hands go, but Omigawa closed the distance and tripped him down. Omigawa got full mount with :45 left, but did little with it. He got mount again and landed a couple short punches. He controlled nearly the entire round, so he gets the 10-9.

Round 3: Young landed an early left hook, taking the aggressor's role. He scored with an uppercut as he continued to fire off combos. Omigawa clinched and took him down. Not good for Young. Omigawa tried a heel hook, but Young slipped free and back to his feet. Still anyone's fight. Young tried a takedown, Omigawa used a guillotine hold to roll Young over and he ended up on top. Omigawa seems to be more interested in positioning than offense from the top, so this one could be tough to score. Omigawa hunted a kimura but gave that up in favor of a few elbows. Young pulled free, ended up on top with a few right hands as the horn sounded. Omigawa 10-9.

Round 1: De Fries immediately shoots in and Broughton is ready for it. They clinch against the cage. They stalemate and restart. De Fries, who has all of his seven wins by submission, wants it on the ground. He ducks under a punch but Broughton gets underhooks and stays upright. Finally, he drops down to his opponent's ankles and puts Broughton on his back. De Fries works to advance position. He's all about looking for a submission, and only occasionally remembers to throw strikes from the top. The punches don't have any steam on them. De Fries takes Broughton's back with :15 left, but runs out of time. The round is his though, 10-9.

Round 2: De Fries puts Broughton down with an early double-leg takedown. De Fries takes Broughton's back and puts the hooks in. Plenty of time to work. Broughton works free for a moment. Broughton snatches a kimura from the bottom and De Fries rolls, leaving Broughton in top position. De Fries is insistent on a kimura. Broughton punishes his body with elbows and De Fries lets it go. Broughton works into a mounted crucifix, throwing blows from the top. The late series of punches and elbows take it for him, 10-9.

Round 3: De Fries looks relatively fresh after his rough second round, and takes Broughton down from the get-go. De Fries works on positioning for a while, and gets full mount with 2:00 left. Finally, a hard punch from mount. Well, that didn't last long. De Fries moves to side control, then north-south. Very lackluster offense given the great positioning from him. Ref Dan Miragliotta has seen enough and resets them. Only 15 seconds left though, and neither really lets their hands go. It's De Fries, 10-9.

Round 1: An early Edwards kick lands below the belt, so we have a timeout just as we're getting started. Edwards throws a spin kick and then drops Maguire with a right hook. Maguire defends and reverses, ending up on top. Maguire looks for offense from the top. Edwards uses the wall to get to his feet, but Maguire drags him back down. Back to their feet again, Maguire with knees to the head. A grappling scramble has them jockeying for position. Edwards tries a guillotine. Edwards pulls out and lands strikes to the body and head. After a rough start, Maguire rebounds to take the round 10-9.

Round 2: After a grappling heavy round, the two start off circling each other in the striking game. Edwards with leg kicks and they clinch. Maguire takes Edwards down with a suplex, then quickly gets his back and sinks in a body triangle. Maguire softens him up with punches from the back, Edwards occasionally firing back an elbow. Maguire switches to an arm bar in the final moments but can't yank Edwards arm free. Still, it's Maguire's round 10-9.

Round 3: Edwards with heavy leather. A body punch lands. Maguire snatches a single leg takedown. Edwards looks for a knee bar, Maguire grabs a foot and Edwards separates. Back to their feet, Maguire lands knees from the clinch. Edwards had a guillotine but lost the position and Maguire ended up on top with half the round left. Maguire to full mount. After some strikes, Edwards gives up his back and Maguire locks a body triangle again. Edwards escaped and ended up on top, but not for long. Maguire got the position back. Maguire again, 10-9.