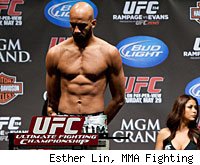 This is the UFC 138 live blog for Cyrille Diabate vs. Anthony Perosh, a light heavyweight bout on the main card of the UFC 138 fight card in Birmingham, England.

Diabate (17-7-1) has won two of his three UFC fights, including a decision win over Steve Cantwell at UFC Live: Sanchez vs. Kampmann. Perosh (11-6) is 1-1 since he returned to the UFC.

Round 1: The lanky Diabate is repeatedly feigning with his knee, threatening the grappler Perosh and trying to dissuade him from moving in for a takedown. Perosh bides his time circling on the outside. Diabate lands a left hand as Perosh attempts to close the distance. Perosh summons his courage to dive low, but his single leg takedown attempt is easily stopped. Perosh tries to pull guard, but Diabate postures up and scores with left hands. Diabate then gets back to his feet. Perosh moves in and takes Diabate down with 90 seconds remaining. Perosh thought about an arm-triangle but didn't get close. It's not enough for Perosh as Diabate takes the round 10-9.

Round 2: Diabate looks confident and moves forward with strikes. Perosh takes advantage and ducks low for a takedown. He quickly advances to full mount, then takes Diabate's back with 3:30 left. Diabate turned into the choke to relieve pressure and Perosh let it go. Perosh went for an arm triangle but released it because Diabate had his defense set with his hand on his ear. Diabate gave up his back and Perosh fired off hard strikes from the top. Perosh then sunk in the choke and got the tapout for his second straight win.