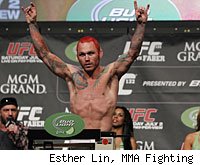 This is the UFC 138 live blog for Chris Leben vs. Mark Munoz, a five-round middleweight bout on the main card of the UFC 138 fight card in Birmingham, England.

Round 1: Munoz opens up with some standup. As Leben fires back, Munoz goes low and gets a takedown. Munoz lands a few punches, but Leben uses the fence to get back to his feet. Munoz tries the high-crotch takedown, but this time Leben defends. Leben turns the tables with a takedown of his own, and scores with a right hand. Munoz gets to his feet but eats a series of right hands for his trouble. They break and reset with 2:20 left. Leben moves forward with a left hand and Munoz steps into a clinch. Leben slams Munoz down. Munoz gets back up but Leben wraps a guillotine as they drop to the mat. Munoz pulls his head free and ends up on top. A hard right for Munoz, then another. He's hammering Leben, who gets up and looks unhurt. Wild round. Leben answers back with hard shots as the round ends. A very close opener, we'll score it for Munoz 10-9.

Round 2: It's hard to imagine they can keep the first-round pace for 20 more minutes. Leben punches his way into a clinch. Munoz wants a trip takedown, and he gets it one minute in. Munoz connects with overhand rights. Leben is bleeding from the left side of his face, but he gets to his feet. Not for long though. Munoz pulls him down again. Leben gets to his knees and Munoz brutalizes him with right hands. Leben eats them without a problem and gets to his feet. Leben gets a guillotine, but Munoz defends it. During a break in the action, the referee brings in the cageside doctor to check his cut. At first, Leben says he can't see, but they allow it to continue after he changes his mind. On the restart, Leben comes out firing, pushing Munoz against the fence. But during a scramble, Munoz ends up on top in mount and fires off power strikes. It's becoming an ultra-physical fight, and it's 10-9 for Munoz.

In between rounds, Leben informs the cageside doctor that he can't see, and the referee waves off the fight.

In his post-fight interview, Munoz politely asks for a middleweight championship match against Anderson Silva, his friend and occasional training partner. Leben makes no excuses for the loss, saying simply that Munoz was better than him tonight.