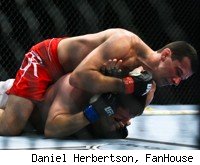 Anthony Perosh survived an early barrage on his feet and then looked tremendous on the ground, beating Cyrille Diabate with a second-round submission on Saturday at UFC 138.

The victory was the second in a row for Perosh, who has been surprisingly successful since coming to the UFC in 2010 as a late replacement to fight Mirko Cro Cop. Perosh lost that fight, but he's now won both of his UFC fights since then.

"The first win was a big relief, and the second one in a row was even better for me because I didn't want the first one to be a fluke," he said. "I'm here to stay at light heavyweight."

More Coverage: UFC 138 Results | Anthony Perosh vs. Cyrille Diabate Live Blog
Diabate landed a good combination very early in the first round to open a cut on Perosh's face, and he also landed a body kick that turned Perosh's ribs red. In the early going it looked like it was going to be all Diabate, but Perosh did a nice job of catching a body kick and taking Diabate down into side control. However, while Perosh stayed on top for the rest of the round, Diabate did a nice job of neutralizing Perosh and not taking much damage. It was a first round that Diabate deserved to win.

In the second round, however, it was a different story: Perosh took control early, getting full mount on the ground and attempting to get into position for an arm-triangle choke a couple of times. When that didn't work, Perosh stayed in the mount until Diabate tried to buck him off, then took Diabate's back, battered him with ground and pound, sunk in a rear-naked choke and forced Diabate to tap.