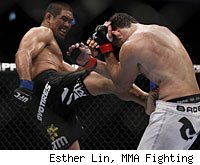 Mark Munoz turned in a tremendous performance on Saturday at UFC 138, battering Chris Leben for two rounds before the fight was stopped prior to the start of the third. Munoz controlled the fight on the ground and opened up a big cut over Leben's left eye with hard right hands, and between the second and third rounds Leben's corner decided to stop the fight.

After being awarded the victory by second-round technical knockout, Munoz said he wants the next shot at UFC middleweight champion Anderson Silva.

More Coverage: UFC 138 Results | Mark Munoz vs. Chris Leben Live Blog
Munoz, a former NCAA wrestling champion, wanted to get the fight to the ground, and he did that with little trouble just 30 seconds into the first round. Leben, however, did a nice job of tying Munoz up and getting back to his feet without taking any damage. It was a back-and-forth round the rest of the way, with both men drilling each other hard several times, although at the end of the round Leben was gasping for air while Munoz looked fresh and relaxed.

In the second round Munoz again got a takedown within the first minute, and Leben again managed to get to his feet, but this time Leben got back up only after eating some hard shots from Munoz, and Munoz secured another takedown quickly after Leben escaped. Leben did briefly attempt a guillotine choke, but by the point that Munoz escaped that choke, he had so badly damaged Leben's left eye that the referee paused the fight to ask the doctor to inspect the cut. The doctor cleared Leben to keep going, but Munoz immediately pounced and got on top of Leben again.

And once the round ended, the cut over Leben's left eye was deemed to be too much, and that was that: UFC 138 came to an end with Munoz's hand being raised. Now he's looking for a chance at the middleweight belt.