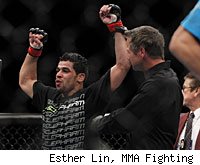 Renan Barao, Brad Pickett, Che Mills and Terry Etim are all $70,000 richer after picking up bonuses for their performances at UFC 138.

Barao and Pickett won the Fight of the Night bonus for their fast-paced bantamweight brawl in the co-main event. Pickett is an Englishman who had the Birmingham fans on his side, and he came out swinging to get the crowd roaring. But it was Barao who showed he had too much for Pickett to handle, ultimately forcing Pickett to tap out to a rear-naked choke after just over four minutes of intense action.

This was Barao's first bonus in his fourth fight under the Zuffa banner. Pickett had previously won a Fight of the Night and a Submission of the Night award, with both of those coming in the WEC. For both men, the bonus makes this the most lucrative fight of their career.

UFC newcomer Che Mills finished off Chris Cope in just 40 seconds, and as a result he won the Knockout of the Night award. For Mills, the $70,000 bonus undoubtedly makes this by far the biggest payday of his MMA career.