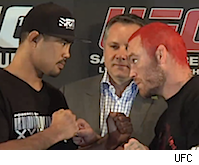 On Thursday afternoon in the UK, Chris Leben suggested that the winner of the Saturday night's UFC 138 main event should become the middleweight division's No. 1 contender.

With a whopping one-fight win streak, that's a bit of presumptuous suggestion from Leben, yet then again, the match's two participants have been two of the division's more successful talents over the last couple of years. Overall, Leben has won four of five, while his opponent Mark Munoz has captured three in a row, and six of his last seven.

Despite the fact that the UFC has given no indication that a top contender might emerge from the bout, both fighters still harbor championship desires, so the fight should not lack for action.

Leben is a given. The man does not know how to fight boring. He's only been involved in three decisions in his last 13 fights, and each of his last three wins has come by finish.

Most of Leben's success comes from his hands. The southpaw has 12 of his 22 career wins by knockout, and he's always been willing to take one in order to give one. That type of approach usually leads to a short career, but Leben has managed to exceed the lifespan of the style.

Part of that stems from the fact that Leben is skilled enough to perform well in other situations, like the clinch and on the ground, where other fighters known primarily for their standup skills might crumble.

Those positions will likely end up being important during the course of what could be a five-round fight against Munoz, a rugged former collegiate wrestling national champion who has transitioned nicely into the striking game.

While Munoz is often characterized as a "wrestler" because of that past, he's actually been more effective as a striker than a wrestler during his MMA career. According to FightMetric, he's only landed 18 percent of his takedown tries during his UFC career, a very low number by any standard, but a stunning one given his background.

That number is a bit skewed by his nightmarish performance in a loss against Yushin Okami. In that fight, which took place in August 2010, he went just 1-for-15 in takedown attempts. Even when he's not successful in putting his opponent on his mat however, the attempt can be meaningful because it puts his opponent on defense. When Munoz gives up an attempt, he often leaves with a power strike on the way out, or he can simply clinch and use his usual strength advantage to briefly turn the fight into a grind and wear down his opponent.

Surprisingly, when it comes to striking, Munoz has been more accurate than Leben, 49 percent to 43 percent by FightMetric's count. And Leben has been far more effective in takedowns than Munoz, 54 percent to 18 percent. So maybe everything that seemed obvious about this fight isn't quite so clear.

Then consider the fact that this is the first time both fighters are scheduled to go five rounds. It's impossible to know how they'll approach it. Leben has never been one to hold back, but he knows Munoz is durable, and maybe he'll be a bit more cautious than usual as a result. Or maybe Munoz will be less likely than normal to standup with an opponent because of Leben's concrete block fists.

Munoz is currently a 2-to-1 favorite to win the fight. That seems like a high number given that prior to his most recent win over Demian Maia, his biggest victory was against Kendall Grove, who has since been cut from the promotion.

So what is Munoz's most likely path to victory? He's got to mix up his attack, putting Leben on his heels, on his back, against the fence, and anywhere else where he feels uncomfortable. His striking is diverse enough to pull off the game plan, and perhaps most importantly, his striking defense is good enough to frustrate Leben's attacks, as Munoz's opponents whiff on 62 percent of punches against him.

Leben will simply aim to keep the fight standing. He's stopped 56 percent of takedown tries against him, and extended periods on the feet will benefit him.

The odds are wrong in this fight. It's a legitimate tossup, because there are no sure things. Munoz isn't a lock to take Leben down, and Leben's no guarantee to find Munoz's chin. Even the standup edge isn't an easy determination to make.

Going on feel, I believe that Munoz has the right tools to slow Leben down. By using his full striking attack, making the fight physical with clinchwork and an occasional takedown, he can limit Leben's effectiveness and opportunities at offense. Leben is fairly good off his back but if Munoz can survive mat time with Maia, he should control the top position against Leben as well. Leben's hands can change the fight at any time, but Munoz is better equipped to grind it out over five rounds, and I think that's exactly what he'll do. Munoz by decision.