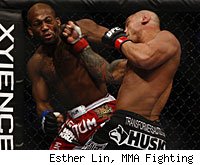 Thiago Alves' nutritionist knows how it must look for his fighter to come in a pound over on his first trip to the scale at the UFC 138 weigh-ins, but he still wishes people would give the UFC welterweight the benefit of the doubt just this once.

As nutritionist Mike Dolce told MMA Fighting from England on Friday afternoon, Alves had no trouble making the 171-pound limit on his second try, and would have made it the first time except for a calibration issue.

"We had four different scales," Dolce said. "Every scale had him between [1]69 [pounds] and [1]71 [pounds]. We were happy. It was an easy weight cut, he felt fine, high energy, bouncing around. We got to the weigh-ins and he was [1]72.3 [pounds] with his shorts on. He took off his shorts and he was [1]72 [pounds] on the dot. We were shocked, but hey, no problem. We walked off the scale, we went backstage, there was a sauna there, he sat in the sauna for a few minutes, then he took a pee, then we went back out and made 171 [pounds]. It was literally that simple."

What's not so simple, according to Dolce, was dealing with the public backlash that he saw on Twitter once news got out that Alves was over. Though Alves made weight "maybe 40 minutes later," according to Dolce, by then the story of his initial miss was out and MMA fans seemed to have made up their minds about him.

"And that sucks, because I see how hard this kid's working," said Dolce. "He understands that he has to work his way back up the ladder, and he's doing everything correctly in his personal, emotional, professional, and financial life to make sure he makes a statement and makes a run in the welterweight division. Having something silly like this, to see everyone jump on him, you know, I understand why since he's had trouble in the past, but come on, the kid came back a half-hour later and made weight with a smile."

Granted, before Alves hired Dolce as a nutritionist, the Brazilian had a bad habit of coming in over the limit. He came in three pounds heavy for his fight with Matt Hughes at UFC 85, and he clocked in at 171.5 for his rematch with Jon Fitch at UFC 117 -- a minor miss that cost him 20% of his fight purse.

Now it seems that fans are so used to Alves missing weight that Friday's miscue only confirmed what they already believed about him, even though, Dolce said, they weren't the only ones surprised by the numbers on the scale.

"There was five guys who got to the weigh-ins and stepped on the scale and were overweight and were shocked also. They had to jump in the back and start trying to cut weight on their own. ...It's always our responsibility as professionals to be on weight regardless of the circumstance. But when there's this many guys this far off, something's wrong. It's not just us."

While several foreign fighters have commented publicly on the difficulty of getting their normal dietary needs met while cutting weight in the U.K., Dolce said he brought "a suitcase full of food" for Alves -- about $400 worth for just a few days, in his estimation. Customs restrictions make it impossible to bring fruits or vegetables in to the country, he said, but the team was well prepared and Alves had "an awesome weight cut."

"He looks great, not sucked down, no dark circles under his eyes," Dolce said. "It wasn't a matter of, can he make weight? It was that we stepped on four different scales and I would have to say that our scale is wrong, because the UFC is the official."