Chris Leben: In My Mind, This Is for Number One Contender 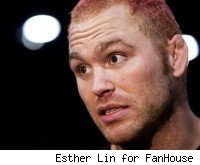 Chris Leben knows that, as far as some people are concerned, he'll always be the person he was in 2004. He knows because they tell him, even if it's not in so many words.

"It's tough," Leben said. "When I go do an appearance or something, everybody wants to see 'The Cat Smasher.' They want to see the dyed red hair."

If he arrives without it -- in other words, if he shows up looking like a normal human being sporting his natural color -- they act shocked, as if he's tricked them somehow. As if he's obligated to be the wild man they remember from TV nearly seven years ago. As if he has no right to turn down their offer of a free drink, even if they only want to buy him one so they can see him go crazy.

It's not that Leben doesn't know why this reputation still follows him around. His antics on the first season of The Ultimate Fighter made him one of the show's most dynamic personalities, for better or worse. It turns out that when you drink too much and put your fist through inanimate objects, people tend to remember. Shaking that image hasn't been easy for Leben, and he has, in his estimation, been his own worst enemy for much of his career ever since.

The difference is, Leben has learned a lot of that stuff in the public eye, beginning with his stint on TUF when he was a reckless 24-year-old, still exorcising some of the demons of his past.

"I grew up a little different than most people and that might be hard for some people to understand, but at the time I thought my behavior was fine," he said. "I thought it was normal. Since then I've worked a lot, done a lot of counseling, and I've realized that there's some things I need to change. I've worked hard at changing them, and obviously I haven't been perfect, but life is about progression. It's not about perfection. I'm still working, still pursuing my goals and trying to be the kind of man I want to be."

For a fighter, certain career goals are relatively simple. You want to win and keep winning, climbing up the ranks until you look down one day and see a shiny belt around your waist. And even though Leben's fighting style is anything but safe, he harbors those same championship dreams.

If he beats Mark Munoz in Birmingham, England at UFC 138 this Saturday, he said, he can't help but think he'll be right on the edge of making those dreams come true.

"Honestly, in my mind this is for number one contender. He's won three straight, I've won four of my last five, just knocked out Wanderlei Silva. I think me and Munoz, if I go out there and defeat him and dominate him that should say that, hey, Chris deserves a crack at the title."

One potential roadblock is the fact that he's already lost once to current UFC middleweight champ Anderson Silva, who TKO'd Leben in his UFC debut just before becoming champion in 2006. Though the UFC has been historically reluctant to give challengers a rematch against a title-holder who owns a win over them, Leben hopes that putting Munoz away might force the organization's hand, he said.

"I think they'd have to take a look at me. They've had reasons, obviously, why they think I shouldn't get a title shot, but if I win this one I think I'm glaring, I'm staring at that number one contender position."

Of course, that assumes he can get past Munoz, whose amateur wrestling pedigree and improved striking game has made him a considerable favorite in the eyes of oddsmakers. That's because, as Leben sees it, people still assume he's little more than a brawler.

"Sometimes I'll read Sherdog[.com] forums and it's, 'Oh, Chris Leben lands another lucky punch,'" he said. "How many times can a guy land a [expletive] lucky punch before you think he must be doing something right?"

Even though he may seem at times like the same slugger he's always been, haphazardly flinging leather and inviting his opponents to do the same, it's not because he's the same reckless kid he used to be. It's not because he hasn't learned anything from those early years, or because he's incapable of doing anything else.

"In my case, it's a calculated risk," he said. "I'll take two to give one. I've got a huge head and I hit hard. But also, my style of fighting, I'm not a fancy guy. You're not going to see me jumping off the cage or throwing a spinning back kick. I throw my left hand. Why? Because it works. And if it ain't broke...you know."