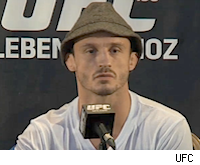 Say this for UFC bantamweight Brad Pickett: the guy's not kidding himself.

When asked by Ariel Helwani on Monday's edition of The MMA Hour if he thought his fight with Renan Barao would be so high up on the UFC 138 main card if the event wasn't in Pickett's home country, the British fighter initially replied, "Maybe, maybe not." Then came a more sober analysis.

"Probably not," he said. While he'd like to believe that he's main card material, he added, it sure doesn't hurt to have the Octagon in your own backyard for one night.

As the former WEC standout gets set to make his UFC debut against the Brazilian Barao, he has reason to hope that a crowd full of his countrymen will help propel him to victory over a foe who Pickett sees as being still slightly untested, despite his prodigious winning streak.

"I've been watching his fights -- it's my job to watch people in my weight class fight -- and yeah, he's good," Pickett said. "He's very well-rounded. He's not just one-dimensional. But then it's also hard to gauge how good he is, because he hasn't fought, at least in my eyes, top-level competition. He's beat everyone he has [had] put in front of him. ...I believe I'm his toughest fight to date, so maybe after this fight I can tell you if he's the real deal or not."


Though Barao hasn't lost since his professional debut more than six years ago, Pickett pointed out that he's only recently begun facing well-known fighters like Cole Escovedo, who Barao beat in his Octagon debut at UFC 130. Meanwhile, Pickett has wins over Demetrious Johnson, who recently fought for the UFC bantamweight title, and MMA veteran Ivan Menjivar.

As for where that puts Pickett in relation to current UFC 135-pound champ Dominick Cruz, Pickett isn't quite sure, he said.

Against Barao, Pickett said, the key to winning will be pace and pressure and "break[ing] him mentally." He said he expects Barao to look to take the fight to the mat "when I hit him hard," but he isn't especially concerned about the consequences of trading blows with the Brazilian.

"I don't worry about his stand-up. Obviously, any punch or kick can knock anyone out if you walk into it in the right way, but his stand-up's not something I'm too concerned about, to be honest."

While Pickett stressed that he's not expecting an easy fight from Barao, "I believe if I perform how I can perform, there's going to be no trouble with me winning this fight."

If Pickett does become only the second person to defeat Barao, the win would likely put him at or at least near the top of the relatively thin bantamweight division. From there, a title shot might not be too far off, though of course, as Pickett pointed out, nothing's guaranteed in MMA.

"If I win this, I go one direction. If I lose this fight, I go in a different direction. My job is go in the right direction and then after this fight, then we can talk about getting a title shot. If I win, and that's a big if because this sport's crazy and he's a tough opponent."