After Long Absence From UK Market, UFC Hopes for Two Shows in 2012 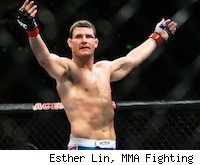 Since making the UK market a priority a few years ago, the UFC visited the country eight times between 2007 and 2010. And even though shows there have tended to do big business, 2011 nearly came and went without a return, until the promotion managed to wedge one into the final stretches of a hectic schedule.

While some in those parts have claimed they've been neglected, UFC executives say they have already planned another event for the UK in 2012, and possibly a second.

"It's still a work in progress but it's a work we're prepared to do, committed to do," UFC managing director of international development Marshall Zelaznik said on Thursday. "Dana and Lorenzo are coming. We're committed to this market. We love coming here. The fans have been very supportive ... We're not giving up on this market and you can expect to see us here next year and I hope more times in the years to come."

The UFC has faced some troubles in the market due to unstable television contracts that have "disjointed" programming in Zelaznik's words, but each time they've brought the show to town, fans have turned out in droves. During the UFC 138 pre-fight press conference, he announced that Saturday's UFC 138 event, headlined by Mark Munoz vs. Chris Leben at the LG Arena in Birmingham, would set a gate record.

Because of time zone differences, North American TV audience sizes are often affected by events held in Europe as well, though Zelaznik did not mention that as a factor in their scheduling decisions.

The UFC's ambitious international schedule -- Scotland and Italy are two European nations they've spoken of visiting in 2012 -- is ultimately to blame, according to the company. There are only so many shows they can produce, leaving someone, somewhere disappointed as a result.

"In a perfect world we'd be here more times a year, but as you know, you've heard our mantra, we're trying to get everywhere, and there's a lot of pressure to bring the event everywhere around the world," he said.