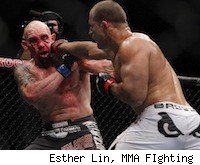 The calendar has finally turned to November, and the countdown is officially on for the UFC on FOX premiere. Since signing the deal in August, much of the company's attention has been focused on its new partnership, and now, the days will quickly wind down until it's showtime. There is still much work to do until then, but UFC president Dana White says that one thing not on his list of concerns is the night's main event fight.

Heavyweight champion Cain Velasquez and challenger Junior dos Santos both safely made it through their respective training camps and are primed to seize the spotlight afforded them.

At least to dos Santos (13-1), he doesn't expect that spotlight to last very long. Even though the UFC has confirmed that one and only one fight will be shown on the broadcast, dos Santos doesn't plan on taking all 25 minutes afforded to him.

"I would be ready for five rounds if it went to five rounds, but personally, I don't think the fight will go five rounds," he said through his interpreter during a Wednesday teleconference. "Both Cain and myself are aggressive fighters. Both of us go on offense. We look to fight. We don't dodge fights.

"I know Cain's been out of the octagon for a while, but I also know he's a phenomenal fighter," he continued. "He's a professional, and I'm sure he's going to bring his best inside that octagon and he's going to be ready. I don't want to fight an injured Cain Velasquez. I want to fight the best Cain Velasquez. That's what I'm preparing for. I don't think he'd take a fight if he couldn't give it his all. It's going to be his first title defense. It's a very big fight for him. I look forward to meeting up with the champion Cain Velasquez at his best."

Velasquez (9-0) says that he will indeed be at his best, his shoulder at full power and range of motion after surgery, rehabilitation and a full camp.

Velasquez stopped short of predicting a stoppage-shortened fight, but given the historic nature of the fight and the UFC's trust in the fighters by placing them in the honored roles, he expects a scrap worthy of the attention it's receiving.

"I'm hoping to make it an exciting fight for the fans," he said. "dos Santos is a great opponent, and we're definitely going to go out there and just throw down. That's pretty much it. People love to see that."

At least by the numbers, dos Santos has some precedent for his prediction. Both fighters have been big finishers throughout their careers. The challenger dos Santos has 11 stoppages in his 13 victories while the undefeated champion Velasquez has stopped opponents in eight of his nine wins. Velasquez is currently considered a slight favorite according to recent lines.

For the UFC there is plenty riding on the November 12 foray into network TV. White said as early as this weekend, his crew will be utilizing extra rehearsals to shore up event production. The show will include elements like backstage interviews with the main-event fighters before the title bout, and other wrinkles. Those changes and the importance of the show caused White to admit that it's the first time in a long time he's had some nerves about a show he's produced. But as far as the in-ring action, he has no doubts. He knows Velasquez and dos Santos will deliver.

"We're working hard and we're going to nail this thing," White said. "I know the fight is going to be great. The fight is the least of my worries. That's why these two are in the spotlight and in this position."