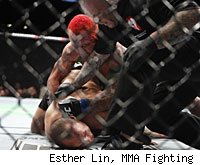 Will Chris Leben and Mark Munoz provide some fireworks in the first five-round non-title fight in UFC history? Will British bantamweight Brad Pickett make a big statement while fighting in the co-main event before his local fans? We'll try to answer some of those questions below.

When: Saturday, the live Facebook stream begins at 1:40 p.m. ET and the tape-delayed Spike TV broadcast begins at 8 p.m. ET/PT.

Chris Leben vs. Mark Muñoz
Leben has been on a roll lately, going 4-1 since the start of 2010, including a 27-second knockout of Wanderlei Silva in his last fight. But for as exciting as Leben can be with his stand-and-bang style, I don't think he has a great chance against a great wrestler like Mark Munoz, who was an NCAA champion at Oklahoma State. As I think about this fight I have flashbacks to the last time Leben fought an NCAA wrestling champion from Oklahoma State, at UFC 102, when Jake Rosholt choked him out. I don't know if Munoz is going to submit Leben, but I do think he'll use his superior wrestling to take Leben down and control him on the ground.
Pick: Munoz

Brad Pickett vs. Renan Barão
Barao is currently riding an incredible 26-fight winning streak, although he hasn't fought much high-caliber opposition during that streak. Pickett is 21-4 in his career and is by far the toughest opponent Barao has ever fought, and I think Pickett wins most of the striking exchanges and wins a decision.
Pick: Pickett

Thiago Alves vs. Papy Abedi
Putting this fight on was a surprising matchmaking decision by the UFC: Abedi is 8-0 and has shown a lot of promise in his MMA career, but he's debuting in the UFC and has never fought anyone even close to Alves' level. Alves has lost three of his last four and probably needed to take a step back, but he should handle Abedi.
Pick: Alves

Terry Etim vs. Edward Faaloloto
Faaloloto is just 2-2 in his MMA career (0-1 in the UFC) and should be an easy opponent for Etim, who's 14-3 (5-3 in the UFC). Etim should be able to submit Faaloloto without too much trouble.
Pick: Etim

Cyrille Diabate vs. Anthony Perosh
Diabate is usually fun to watch and should be too much for Perosh, who's best known for putting up a spirited effort in a losing cause when he was asked to fight Mirko Cro Cop on short notice last year.
Pick: Diabate