Fedor Emelianenko vs. Jeff Monson to Air Live on Pay-Per-View 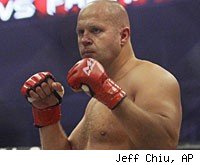 Fans interested in watching the upcoming Fedor Emelianenko vs. Jeff Monson M-1 Global fight on Nov. 20 will be able to do so through pay-per-view television.

The promotion announced on Thursday that the event will be carried by iN Demand, DIRECTV, DISH Network and Avail-TVN for "a suggested retail price of $29.95." The event will air live from Olympic Arena in Moscow, Russia, at 7:30 a.m. ET / 4:30 a.m. PT.

Emelianenko (32-4, 1 NC) will look to snap his three-fight losing streak when he meets "The Snowman" in his home country. "The Last Emperor" hasn't won since Nov. 2009 when he defeated Brett Rogers via second-round TKO. Since then, he dropped fights to Fabricio Werdum, Antonio Silva and Dan Henderson.

The 40-year-old Monson (43-12) is 9-1 in his last 10 fights. He most recently defeated Paul Taylor via first-round submission after losing to Daniel Cormier in his Strikeforce debut in June.