With Career on the Line After UFC 137 Loss, Eliot Marshall Plays the Waiting Game 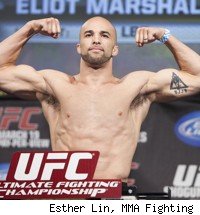 Times like these, it's the waiting that really gets to you. Either the call is coming or it isn't. Either your dream is dead -- possibly for good this time -- or else it still has the faintest hint of a pulse. Eliot Marshall doesn't know yet which way things are going to swing following his narrow decision loss to Brandon Vera at UFC 137, but he's not terribly optimistic.

"I'm pretty sure I'm done, but what can you do?" Marshall said on Tuesday afternoon. "I really genuinely believe that [the UFC is] going to cut me."

It's a shame, considering how close he came to not only winning the fight, but finishing Vera in the third round. He came so close, in fact, that Marshall wasn't the only one who was stunned when the judges failed to give him a 10-8 round in that final frame.

"In my opinion, the worst it could have been was a draw," said Marshall. "I don't know what else you've got to do [to get a 10-8 round]. I showed good power, knocking him down twice in that round, got a takedown, almost choked him out and I broke his arm."

All three judges gave Marshall a 10-9 in the final round, just like all three gave Vera a 10-9 in rounds one and two. Despite the near finish and the questionable scoring, it still goes down in the record books as a win for Vera and yet another loss for Marshall, who came into this bout on shaky ground with the UFC.

After getting TKO'd by Luiz Cane at UFC 128 in a fight he took on ten days' notice just to get back in the UFC, Marshall needed a victory just to stay viable. He may have been a 5-1 underdog coming into the bout, but in the final seconds he had the armbar on so tight that Vera had to choose between defeat and injury. Vera chose the latter, sustaining a torn ligament in his left elbow that landed him on the medical suspensions list, but preserved his decision victory.

"I want to say 99 percent of the people tap in that situation; he didn't," Marshall said. "If he tapped, we'd be having a different discussion. You'd be calling me, asking what I'm going to do with the $75,000 bonus for Submission of the Night. He chose to let his arm break. He made a choice for his career that he thought it would be better to go on after his breaking his arm."

With the loss, Marshall may be out of a job and a career, since he said publicly before the bout that he'd likely retire if released from the UFC for a second time in two years. With that on the line, and with as close as he came to victory, it's hard for him not to feel as if throughout his time in the Octagon the breaks never seemed to go his way.

"It kind of sums up my career with the UFC, from my first fight for The Ultimate Fighter until now," he said.

That first fight was his contest against Karn Grigoryan for a spot on TUF's eighth season. Before being admitted to the house, every fighter had to earn his place with a victory, which meant spending all day cutting weight in a hotel room before the exhibition bout. Marshall asked for a scale in his room so he could check his progress, he said, and he was told one would be delivered.

"A scale never shows up. Never. So I just have to cut the weight, having no clue where I am. I mean, I have a rough estimate of where I'm starting, but a pound matters. You miss [weight], you're out."

Marshall weighed in at 197 pounds for that 205-pound bout, he said. He went on to batter Grigoryan in the fight, but lost a split decision that shocked most observers. Ostensibly, his TUF run should have ended there, but Marshall was selected as a replacement for an injured cast member and his career was launched.

Now Marshall is left waiting for news on his future as his management makes his case to the UFC. Lex McMahon, Marshall's agent, is more optimistic about his future, since the way the Vera fight ended "gave us a lot to work with."

Marshall, however, seems to be preparing himself for the worst. If the UFC releases him again, he said, he'll most likely call it quits and do something else with his life.

"You can't say a hundred percent, but the only way I'm not retired is if I get a big money fight. I won't fight in regional promotions for $5,000. I'm not doing that. It's too tough on my family. My kid's getting to the point where he knows when I'm gone. He knows when I'm not home for a week. So that's not happening anymore. Unless there's good money on the table, I'm done."

But if he is done with MMA after coming so close to a victory, and after what may have been the single best round in his UFC career, how will that sit with him in the years to come? If he ends up retired from fighting at the age of 31 all because one man refused to tap and three judges declined to mark a 10-8 on their scorecards, is that going to be an ending he can live with?

Marshall doesn't know the answer just yet. For now, he's waiting. Waiting for bad news, for any news. Waiting to find out which direction his life is going to head in now, and preparing for whatever comes next.

"I proved everything I needed to prove to myself," Marshall said. "My last fight [against Luiz Cane], ten days' notice or not, it was bad. I'll be the first to say that. It was bad in more ways than one. Physically, my mental was off, I kind of fell apart in my mind. But this fight I was prepared, I was ready to go. If that was my last round, that's my last round. It's a pretty good last round, right?"