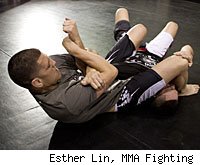 Nick Diaz is the top contender for Georges St. Pierre's UFC welterweight title, and he deserves to be.

The reason the UFC decided to reverse course and book Diaz vs. GSP is that it has all the makings of a pay-per-view blockbuster. But it was also the right decision from a competitive standpoint: After Diaz's UFC 137 victory over B.J. Penn, he's demonstrated that he deserves to be considered the No. 2 fighter in mixed martial arts at 170 pounds.

So as we rank the Top 10 welterweights in MMA, GSP stays on top with Diaz on his heels. Find out how we rate the rest of the division below.

1. Georges St. Pierre (1): St. Pierre has really never been threatened since losing to Matt Serra in April of 2007; his current nine-fight winning streak consists of six unanimous decisions, two TKOs and one submission win without ever being in any trouble. I don't think St. Pierre is going to lose to Diaz, but I do think Diaz has the right style, both with his high-volume punching and his ability to submit people off his back, to challenge St. Pierre in a way he hasn't been challenged before.

2. Nick Diaz (4): As Diaz won 10 fights in a row over the last three years, a lot of skeptics raised questions about whether the guys he was beating were really all that good. No one can ask that about his 11th straight win: Penn is universally regarded as a Top 10 welterweight, and Diaz gave him a thorough pounding. Jon Fitch, who's No. 2 in most welterweight rankings, wasn't as successful against Penn as Diaz was. Diaz can compete with the elite, and he's earned his opportunity to fight the best of the best in St. Pierre.

3. Jon Fitch (2): After 11 months off following his draw with Penn, Fitch is slated to return against Johny Hendricks at UFC 141 on December 30. That's a fight that won't do much for Fitch in the welterweight division, but it should be a good opportunity for him to grab another unanimous decision victory.

4. Josh Koscheck (5): Koscheck looked great in his first-round knockout of Matt Hughes in September. Koscheck isn't ever going to beat St. Pierre, but it was good to see that Koscheck has recovered and is ready to resume his role as one of the welterweight division's elite fighters.

5. Carlos Condit (7): Condit has looked great on his current four-fight winning streak, but I see no reason he's more deserving of a title shot than Diaz. I'd like to see Condit win another fight against another Top 10 opponent before he becomes the top welterweight contender.

6. Jake Ellenberger (NR): Ellenberger enters the Top 10 on the strength of his 53-second knockout of Jake Shields. I'd love to see him rematch Condit, whom he lost to by split decision in 2009.

7. Rory MacDonald (9): The 22-year-old MacDonald is 12-1, with the only loss coming to Condit. There's little doubt that he'll be fighting for the UFC welterweight title some day, although he's in no rush to do that. He gets Brian Ebersole next at UFC 140.

8. B.J. Penn (6): Penn is 1-3-1 in his last five fights, but there's no shame in losing to Frankie Edgar and Nick Diaz, or drawing with Jon Fitch. No matter how discouraged he was after losing to Diaz, Penn shouldn't retire. He has a lot of big fights ahead of him.

9. Jake Shields (3): Shields is now on a two-fight losing streak after being decisioned by GSP and knocked out by Ellenberger. But look for him to bounce back in 2012. He has too much talent not to.