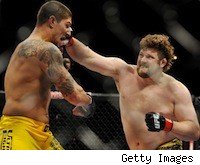 The UFC continues its expansion at a blistering pace, recently signing a major television deal with Brazil's Globo, and planning a February show in Japan, an event that will mark the first show there under Zuffa ownership. But according to UFC president Dana White, that's just the tip of the iceberg.

On a Wednesday teleconference to promote the UFC on FOX premiere, White discussed some other worldwide plans, including an Ultimate Fighter "World Cup" that would take the winners from several international editions and match them against each other to produce one champion.

The idea has been a long-held one for White, and though its production remains off in the future, steps towards making it a reality are in the here and now.

A deal to produce the UFC's first international edition has been struck, and the show will soon begin taping in Brazil, likely in the spring of 2012.

"It's really spread like wildfire all over the world," White said of MMA. "There literally isn't a country that you could point your finger on the map that we couldn't get a fighter from. I think we've done a great job finding and cultivating talent from all these different countries."

White said he expected a "phenomenal" amount of talent to emerge from the new Brazil edition of the show, which will probably air in the US on FUEL.

Of course, to pull off a World Cup-type of event, the UFC will have to produce several more versions of the show around the globe. The next likely destinations include Canada, the Philippines and the UK.

"We're getting closer and closer to this dream I've had for the last five years," he said.

As an example of the promotion's growing appeal, White noted that the upcoming UFC on FOX event would air live in 19 countries, including some places not thought of as MMA hotbeds like Italy, Korea, Croatia and Greece.