Anthony Johnson on Fighting Vitor Belfort: 'All I Know Is, I'm Going to Win' 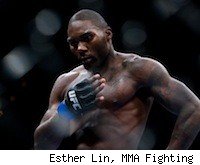 The call came as a surprise. Anthony Johnson was at home when his phone rang, with manager Glenn Robinson on the line. Since defeating Charlie Brenneman in early October, Johnson had been awaiting his next assignment, and he instinctively knew this was it.

"I knew it was something serious," he told MMA Fighting. "He doesn't just call to joke around."

But when Robinson passed along the UFC's fight offer, Johnson couldn't help but be a bit taken aback. After winning two straight as a welterweight, Johnson's services were being requested in the middleweight division. And if that wasn't enough, he was being asked to fight recent No. 1 contender Vitor Belfort. On his home soil.

"It surprised me," he said of the offer to face Belfort at UFC 142. "It really did. Just for a second. I said at first, 'Are you serious?' I really didn't believe it, but he's straight-up and honest so I knew he was being serious. I had no hesitation. I said, 'Alright, let's do this. Let's have fun with this.'"

Johnson (10-3) says that the time was going to eventually come to move up to 185 pounds. The move has been talked about for years by media and fans. But it was not something that he was thinking about when the call came. In each of his last two fights, he says he had no problem making the welterweight limit, and even after accepting this fight at middleweight, he's not committed to making it his permanent home.

The way Johnson views it, it's just a golden opportunity, one simply not worth passing up.

"This is a challenge, and what's life without challenges?" he said. "I hopped on this challenge and accepted it. Sometimes you have to go out of your comfort zone or your element just to see how you do."

The matchup between the two is fascinating in that they are both heavy strikers with one-punch knockout power. Johnson has a wrestling background and Belfort's takedown defense has rapidly improved over time.

Without question, Belfort presents Johnson's most intriguing challenge to date. In November 2009, he faced Josh Koscheck and lost via rear naked choke. But Belfort doesn't have Koscheck's wrestling acumen, and he probably won't look to take the fight to the ground.

That makes is possible that the two will test their proven standup skills against each other. And that suits Johnson.

"I feel just fine about the matchup," he said. "He can't do nothing that I can't do. Anything he thinks he can do, I think I can do better. I think it's a pretty even matchup. He's fast, I'm fast. He's powerful, I'm powerful. It's going to be a fight that really determines who's the man at the end of the day. Either one of us can get dropped, so it's going to see who has the most heart."

Johnson doesn't say that with any inflated sense of self-worth. When asked why he accepted the fight in the first place, he said simply, "it's Vitor," before outlining the Brazilian's many accomplishments as a former champion, top 10 contender and influence on him.

Johnson, who currently weighs 210 pounds, says he has no idea how his body will feel at his new weight class, but believes he'll be even faster and have more energy than normal. So in essence, this is a test, but it's coming against one of the most dangerous men in the division.

In Johnson's mind, he has nothing to lose. If he does fall to defeat, he can return to welterweight and continue his career there. If he happens to win, he'll be a hot commodity in two weight classes. But defining his weight class and winning a championship is not a priority. At least not right now.

"When it comes down to it, the belt is where it's at," he said. "That's everyone's goal. But right now I'm thinking about what's directly head of me. The belt is out of sight, out of mind."

Johnson has his marching orders, and that's to prepare for his fight on foreign turf. That alone is a scarier proposition than fighting Belfort, he says, noting that his "Blackzilians" teammate Danilo Villefort, a native Brazilian, told him that the local fans chanted "You're going to die" to several American fighters during August's UFC 134.

That won't change anything for him, not when there's so much to gain. Whether he's a welterweight, middleweight or somewhere in between will be an ongoing question. On January 14, we will at least learn a piece of that answer.

"All I know is I'm going to win," he said. "I'm going to go out and do my best, and give the fans what they want and deserve. This is my first fight in Brazil. I have so much energy and excitement built up in me for this. I'm ready to get in camp, get with the Blackzilians and do what we do: train hard and win fights."