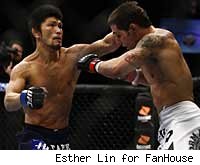 UFC 138 will air via tape delay on Spike TV in the United States, however, the prelims will air live on Facebook earlier in the day, according to UFC officials.

The event, which will take place on Saturday night from LG Arena in Birmingham, England, will mark the UFC's return to England for the first time since UFC 120 in Oct. 2010.

Interestingly enough, the main card will air live in every country except the United States. For example, Canadian fans will be able to watch Mark Munoz vs. Chris Leben live on Rogers Sportsnet, while UK fans can watch it on ESPN UK. Making matters even more confusing is the fact that Bellator, which is now owned by Viacom, the parent company of Spike, isn't airing their weekly event Saturday night on sister station MTV2 to avoid competing against a tape delayed Spike event, however, if Spike would have decided to air UFC 138 live on Saturday afternoon in the United States, they could have avoided that problem altogether.

Below is a look at the full card: