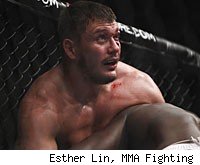 Sporting a shiner from his UFC 137 loss to Cheick Kongo, Matt Mitrione visited The MMA Hour and said he wished his fight had looked more like the main event.

"It sucked. It was boring," Mitrione said of his unanimous decision loss to Kongo. "I want to put on exciting fights"

Mitrione said that immediately following his loss, he and his friend and training partner Chris Lytle went back to the locker room and watched the main event, Nick Diaz vs. B.J. Penn, on a backstage TV. Seeing the great showing Diaz put on in beating Penn by unanimous decision, Mitrione said he instantly recognized what he should have been doing.


Mitrione said he could hear the crowd booing during his fight with Kongo and realizes that he didn't make the fans happy.

"Both of our performances -- I think it was just a dull fight," Mitrione said. "It was just a lot of chasing him down."

The loss was the first of Mitrione's professional MMA career (he also lost a fight during his time on The Ultimate Fighter), and he said the lesson he learned from it is that if he's going to lose he'd rather go down with guns blazing.

"It was a learning experience but it sucks at the same time," Mitrione said. "I'd rather get my ass kicked in dramatic fashion than lose with the crowd booing."

Mitrione said he wants to spend some time in the gym getting better before he commits to another fight, but that when he does return to the Octagon (likely some time in the spring of 2012), he's either going to win or get knocked out trying.

"I can tell you it won't happen again," Mitrione said of the style of his loss to Kongo. "If I lose again it's going to be because I get my ass kicked in an ugly, ugly way."