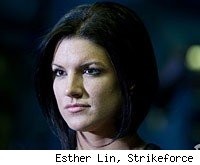 Another full calendar year will go by without Gina Carano competing in an MMA cage.

Carano, still arguably the most famous women's MMA fighter in the world, will not be fighting on Strikeforce's Dec. 17 card in San Diego, sources close to the event confirmed with MMAFighting.com. There had been some speculation that Carano was targeting a return to action on the card.

The 29-year-old Carano last competed for Strikeforce in Aug. 2009. She lost via first-round TKO to Cris Cyborg in the last women's fight to headline a major Strikeforce card on Showtime. Since then, Carano has pursued a movie career and stayed out of the MMA spotlight, rarely doing media appearances or showing up to fights.

She announced her return to Strikeforce in February, however, an undisclosed illness forced her to pull out of her June 18 fight against Sarah D'Alelio. As of right now, Strikeforce has no plans for her return to the cage.

So the next time you want to see Carano in action, it will have to be on the silver screen when she stars in her first motion picture, "Haywire," which is set to be released on Jan. 20.

The promotion's year-end show will consist of a four-fight main card, which will air live on Showtime: