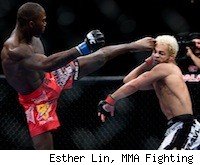 Anthony Johnson has finally made the step most felt was inevitable, moving up a division to middleweight.

It won't take him long to get tested at his new home. The fearsome slugger will step right into the upper echelon of the division when he takes on Vitor Belfort at UFC 142.

The promotion confirmed the matchup on Tuesday.

Johnson has spent his entire UFC career at 170 pounds, though he's struggled to make weight on more than one occasion. The timing of the move comes as a bit of a surprise though, as Johnson returned from a 16-month absence earlier this year and got off to a 2-0 start with wins over Dan Hardy and Charlie Brenneman.

Belfort would represent his highest-ranked opponent since losing to Josh Koscheck in November 2009.

Johnson is 10-3 overall with seven knockouts, and has won five of his last six.

Belfort recently rebounded from a UFC 126 title fight loss to Anderson Silva by knocking out Yoshihiro Akiyama in August. That upped his record to 20-9.

UFC 142 will take place on January 14 from a yet-to-be determined location in Brazil. The only other officially announced bout is a featherweight title bout with champion Jose Aldo attempting to defend his belt against Chad Mendes.