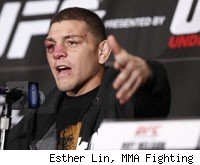 Former Strikeforce welterweight champion Nick Diaz, who vacated his belt in that promotion to rejoin the UFC to challenge for Georges St-Pierre's 170-pound title, led all fighters with a $200,000 payday. His opponent in the main event, former UFC lightweight and welterweight champion BJ Penn, earned $150,000 in the loss.

Following the fight, which Diaz won by unanimous decision, Penn told Joe Rogan his intention is to retire from the sport. Diaz, though, was given an immediate title shot against St-Pierre – a title shot he was scheduled to have at UFC 137 before UFC president Dana White pulled him from that fight after he missed two press conferences to promote the event.

Additionally, Diaz and Penn each earned another $75,000 for winning the Fight of the Night bonus award.

Co-main event heavyweight Cheick Kongo was the third highest paid fighter on the card. After his $70,000 win bonus, he made $140,000. And Brandon Vera, fighting for the first time since a January loss to Thiago Silva that was overturned to a no contest when Silva tested positive for banned substances, made $120,000 for his win over Eliot Marshall.

Mirko "Cro Cop" Filipovic alluded all week that his fight against Roy Nelson may be his last one. And after his third-round TKO loss, Cro Cop told Rogan that would be his last fight. He earned $75,000 in the loss.

The complete purses (show money/win bonus) are listed below. They do not include post-fight bonus totals, non-disclosed "locker room" bonuses or any sponsorship monies.