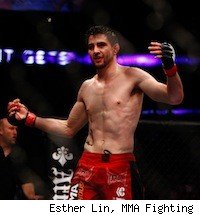 Malki Kawa had a bad feeling when he heard his phone ring and looked at the caller ID. It was then that he realized UFC president Dana White was on the other line. UFC 137 had just ended 30 minutes earlier, and it was already after midnight on the east coast. It was not a time for mindless chit-chat. It was a time for serious business.

As is his style, White cut to the chase. Georges St-Pierre no longer wanted to fight Kawa's client Carlos Condit next. Instead, the UFC welterweight champ wanted to fight Nick Diaz, the winner of UFC 137's main event. We all now know the outcome. St-Pierre got the fight he wanted, and he'll be fighting Diaz in early February. Condit? He wasn't too happy, and he didn't exactly "step aside" as White told the media at the post-fight press conference.

"I could understand them coming to us like that," Kawa said on Monday's edition of The MMA Hour. "The issue with the whole 'he decided to step aside,' obviously, that wasn't the case. There was no just stepping aside. There was a little bit more than that. It's going to take more than that. I think we're way more upset with Georges and the way Georges handled it than we are with the way Dana presented it or anything like that."


Everything changed in the moments after UFC 137. Diaz got the ball rolling by saying St-Pierre was scared and by questioning his injury just after his main event win. According to White, St-Pierre then "flipped out" and demanded that he bypass Condit and face Diaz next.

But as Kawa pointed out, Diaz had previously called out St-Pierre after he was originally replaced with Condit, and St-Pierre never responded. In addition to that, St-Pierre had gone on record saying that believed Condit presented the tougher challenge.

"I don't know if the emotions of the moment got to him, and he just decided to do that," Kawa said. "It's kind of un-Georges-like."

Kawa said that he and Condit didn't step aside as graciously as it sounded, describing the ordeal as "gut-wrenching."

But ultimately, Kawa said that they are "company men" who made the move that the promotion wanted. He also suggested that there was some financial reward for bowing out.

Kawa said he tried to keep things in perspective by noting that he originally got Condit moved into the title slot with some hustle of his own, and that sometimes, that sort of thing works against you. He even candidly admitted that if he was Diaz's manager, he would have lobbied for the fight, too.

"Are we pissed off about it? Absolutely," he said. "But it's not like I've never been on other end of stick where I put one of my fighters ahead of someone else and another guy got shafted or screwed over. It's just business, it's not personal. It's nothing personal with Georges. Are we upset with him? Absolutely."

Meanwhile, Condit has every intention of fighting again instead of waiting to take on the St-Pierre vs. Diaz winner. Kawa said the UFC has thrown out some possibilities, but that nothing has been decided upon. The biggest factor is that it has to be someone that Condit can gain something from in fighting, mentioning Josh Koscheck and Jake Ellenberger as possibilities.