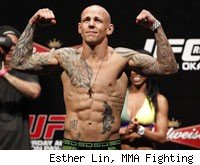 Not long after announcing a lightweight battle between still-surging contender Donald "Cowboy" Cerrone and Nate Diaz – who combined have 15 fight night bonuses in their last 22 fights – the promotion announced a pair of featherweight bouts for UFC 141.

Former WEC featherweight title challenger Manny Gamburyan will face Diego Nunes, a bout rescheduled from UFC 135 in September. And Junior Assuncao will take on "The Ultimate Fighter" winner Ross Pearson. The UFC made the announcement of the fights on its Twitter feed and official website.

Gamburyan (11-6, 2-4 UFC) looks to break out of a two-fight skid that started with his featherweight title knockout loss to champ Jose Aldo at WEC 51 in September 2010. In June, returning to the UFC for the first time since January 2009, Gamburyan lost a majority decision to Tyson Griffin, who was making his featherweight debut. Gamburyan was a Season 5 contestant on "The Ultimate Fighter," and reached the finals before losing to Diaz.

Nunes (16-2, 1-1 UFC) will return for the first time since a close decision loss to Kenny Florian at UFC 131 in June. The former WEC standout has gone to a decision in his last seven bouts.

Assuncao (13-4 MMA, 2-2 UFC) won his return to the UFC in September with a unanimous decision over the debuting Eddie Yagin. It was Assuncao's first fight at featherweight after competing at lightweight throughout his career. Assuncao went 1-2 in his first stint in the UFC from 2006-07.

Pearson (12-5 MMA, 4-2 UFC) suffered a split decision loss to Edson Barboza at UFC 134 in June in Rio de Janeiro. Pearson won Season 9 of "The Ultimate Fighter," taking a unanimous decision against Team Bisping teammate Andre Winner. He won two more after that, including a decision win over Dennis Siver. But with two losses in his last three fights, a win may be crucial for him.

UFC 141 will take place Dec. 30 at the MGM Grand Garden Arena in Las Vegas. The pay-per-view will be headlined by a heavyweight contenders fight between former champion Brock Lesnar and former Strikeforce champ Alistair Overeem, who will make his UFC debut. The co-main event will be the lightweight bout between Cerrone and Diaz.