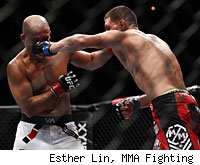 With UFC 137 in the books and the spookiest day of the year now upon us, let's all grab a mini-Snickers and sort through the biggest winners, losers, and everything in between from Saturday night's action in Las Vegas.

Biggest Winner: Nick Diaz
I remember around this time last year, before Diaz fought KJ Noons, watching him put on the boxing gloves and headgear in his gym in Lodi, Calif., and walk down one sparring partner after another. In the beginning, most of them did pretty well against him. They landed some punches, circled away, and you could see their confidence growing. But Diaz never slowed down, never stopped coming, and eventually he'd end up backing every single one of them against the fence and digging into their ribs with hooks that you could hear over the constant stream of Tupac songs that blared from the stereo. One by one, he wore them down with sheer pace and pressure until they quit, both mentally and physically.

Diaz performed the exact same act of will against Penn on Saturday night, and it was just as effective. He started slowly and gradually cranked up the volume, confident that his opponent would wilt before he would. He took it and he dished it out, and by the end of three rounds there was no doubt that he was the better fighter. Of course, as soon as the fight was over, he went back to being the bizarre, mercurial person we've gotten to know (and yet not know) over the last several years. Even when things had gone well for him, he remained unhappy. Even when he was offered the title shot he'd recently squandered, he remained utterly convinced of his own status as the permanent victim. What can you do with a guy like that? Put him up against the champ, I suppose. Let him do what he does best, which is fight, and hope the rest of us can tolerate what he does worst, which is just about everything else.

Biggest Loser: B.J. Penn
The nicest thing you can say about Penn's performance is that he didn't quit. Even though he didn't look thrilled about it, he got up off the stool for round three and took his medicine for five more minutes. Other than that, the bright spots were few and they dimmed in a hurry. I can understand why Penn, a nearly 33-year-old former champ, thinks it would be better to hang it up than continue on as some novelty act or gatekeeper, but beware of any retirement announcement that comes in the emotional moments just after a bad beating. This is the same Penn who licked blood off his gloves and promised death to future opponents while jacked up on post-fight adrenaline. If those were the highs, this could simply be the low. Calling it quits in the cage immediately after a loss is a little like breaking up during an argument. The chances of it sticking are inversely proportional to how long you've been together. Six months? Sure, one bad argument might do it. But Penn and MMA have had a lengthy, sometimes rocky relationship. Seems unlikely that they won't try to patch things up at least once or twice.

Hardest Working Man in the Fight Biz: Donald Cerrone
His submission of Dennis Siver was his sixth straight win and his fourth of 2011. Apparently he's not content with that, because he immediately turned around and lobbied for another fight before the end of the year, which it now looks like he'll get against Nate Diaz at UFC 141 in December. I'm not sure if Cerrone is putting title shots and other typical concerns out of his mind because he's savvy enough to see the situation for what it is in the crowded lightweight division, or if he's driven only by the reckless pursuit of a paycheck. Either way, he's at his best when he's busiest, and 2011 is turning out to be a banner year for his career and his bank account. After all the paper he's stacked via purses and bonuses, this is one year when you really want to be on "Cowboy's" Christmas list.

Most Impressive in Defeat: Eliot Marshall
Brandon Vera came into the fight with Marshall as a 5-1 favorite, then nearly got his head knocked off and his arm snapped in half, but still somehow emerged with the decision victory. It goes down as a loss for Marshall at a time when he can't afford it, but will the UFC brass see the process rather than the result? It might not have been a spectacular fight, but for Marshall it was clearly a step in the right direction. It would be a shame for the UFC to cut him after a third round like that, which just might have been the single best round of his UFC career. If he sticks to his promise to retire after another UFC release, that's the kind of finish that could keep a man up at night for years to come. If only he'd had just a few more seconds. If only he'd landed one or two more punches. You can play that game for a long time, particularly if it cost you your career.

Least Impressive in Victory: Hatsu Hioki
He did just enough to get the decision over George Roop, but not much more. At least Hioki started off his stay in the UFC with a win, which is more than you can say for a lot of his compatriots. Though if that's the best you can do against a mid-level featherweight like Roop, how far can you really go in this organization? Maybe Hioki struggled with nerves, and maybe Roop's size and strength gave him more problems than he expected. I don't know. What I do know is that the Hioki we saw on Saturday looked like just another fighter, not some big name acquisition. You hate to judge a guy too harshly on the basis of one performance, so let's just say that Hioki still has plenty of work to do to make a name for himself on this side of the Pacific.

Let's Hope We've Seen the Last Of: Mirko "Cro Cop" Filipovic
He acquitted himself well in what he'd have us believe was the final fight of his career. He took some of Roy Nelson's best shots and even fired off a few of his own (though with that beard he probably had to guess at the location of Nelson's chin). Even if he didn't have enough to pull out the win, he still did better than most of us expected and ended on a classy, dignified note in his post-fight remarks. Unlike Penn, his retirement declaration didn't seem driven by emotion. It was clearly something he'd given a lot of thought to before the fight, and he did what he said he'd do if he came up short. The question is, will he disappear from the fight game entirely, or just the UFC? Cro Cop wouldn't be the first man to have a hard time turning down an easy buck from some small-time promoter looking to sell what's left of his name. You couldn't exactly blame him if he gave in to a tempting offer from M-1 Global or ProElite somewhere down the line, and he clearly still has at least a little bit of gas left in the tank. Still, no matter how many times you see that particular drama playing out with an aging fighter, it never gets any easier to watch. For the sake of his legacy and his health, let's hope Cro Cop really does know when it's time.

Most Disappointing: Cheick Kongo vs. Matt Mitrione
In retrospect, it seems silly. This was the co-main event? The UFC seemed to be banking on some heavyweight fireworks to help out a flagging fight card after the injury to GSP, but what it got instead resembled a staring match more than a slugfest. If you could knock a man out just with crazy eyes and feints, Mitrione would be the heavyweight champ by now. But once Kongo finally realized that the "Meathead" blitz wasn't coming, he settled down and managed to wrestle his way to a decision win. It was a fight both men might rather forget, albeit for different reasons. Kongo looked tentative and overly defensive in his first fight since the comeback win over Pat Barry. Mitrione never got started at all, and showed his inexperience on the mat in the final frame. In the end, it was a bummer of a fight that likely reminded the UFC why these two aren't quite ready for the top of a pay-per-view card just yet. Meanwhile, Donald Cerrone will just be over here, kicking people in the head on Spike TV for free.

Begging for His Walking Papers: Tyson Griffin
He missed weight (by a lot), looked flat and uninspired from the opening bell, and got himself knocked out in a little under three minutes for his fourth loss in five fights. I know he said he was under the weather coming into this fight, but I don't see how Griffin doesn't get cut after this terrible weekend. After he missed weight, he was on Twitter basically shrugging his virtual shoulders and explaining that he had "no excuses." Okay, so he's taking responsibility for his mistakes. That's a good sign, right? Then he gets knocked out and he's back on there telling his followers about his after-party at the Luxor. I'm not saying he needs to post pictures of himself crying into an appletini at Cathouse, but if he's not feeling a sense of desperation about his career now, what's it going to take?

Best Quick Change: Roy Nelson
He showed up to fight looking like a roadie for Foghat, then showed up to the post-fight press conference looking like a henchman from a James Bond movie. That's versatility, right there. Okay, so maybe that, plus his current one-fight win streak, isn't enough to get him that title shot he asked for, but at least it keeps him in the conversation at heavyweight. The guy's a character, and he can fight a little bit. Now his physique is even moving in the right direction, though there's still work to be done in that department before he appears in an Under Armour ad alongside GSP.