Back for More: Donald Cerrone-Nate Diaz Planned for UFC 141 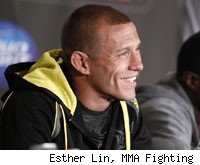 LAS VEGAS – Someone must have told Donald Cerrone when Chris Lytle retired, the UFC had a job opening for its Bonus King position.

The "Cowboy" will go after his fourth bonus of 2011 and will tie the UFC's record for most fights in one calendar year when he meets Nate Diaz at UFC 141. The UFC on Monday afternoon confirmed the lightweight scrap will serve as the co-main event.

UFC 141 will take place at the MGM Grand Garden Arena on Dec. 30, a rare Friday pay-per-view for the UFC to avoid going head-to-head with the New Year's Eve holiday the following day. Scheduled to headline the card is a heavyweight contenders fight between former UFC champ Brock Lesnar and recent signee Alistair Overeem, the former Strikeforce heavyweight champion who was released from that promotion earlier this year only to sign with the UFC.

Cerrone on Saturday won his sixth straight fight and fourth in the UFC since merging over from the WEC when he submitted Dennis Siver in the first round at UFC 137. Of his four UFC fights so far in 2011, Cerrone has three post-fight bonus awards – one each for Fight of the Night, Knockout of the Night and Submission of the Night, which came against Siver.

Diaz snapped a two-fight losing skid last month when he submitted Takanori Gomi in the first round at UFC 135, winning Submission of the Night. That came after back-to-back decision losses to Dong Hyun Kim at UFC 125 and Rory MacDonald at UFC 129. Diaz has been nearly as active as Cerrone – he will fight for the fourth time this year.

Cerrone's bonus money in 2011 totals $215,000. His show and win purse totals out to $174,000 this year. A win and another bonus against Diaz would put him over the half-million mark for the year – not bad for a fighter who last year at this time was winning $10,000 bonuses in the WEC. Diaz has won seven bonuses in his last 11 fights.

The UFC record for non-tournament fights in one calendar is five, currently shared by Roger Huerta in 2007, plus Chris Leben and Nate Diaz's brother Nick, both in 2006. Assuming no delays in Cerrone's fight with Nate Diaz in December, he'll join that small group.

After UFC 137 on Saturday, Cerrone said he wanted to get back in the cage as soon as possible, and even mentioned he'd love to be on the UFC's December card.

"I want to keep fighting," Cerrone said at the post-fight press conference. "I don't want to sit and wait.

Cerrone even mentioned earlier in Fight Week that he was considering a move down to featherweight to fight Nam Phan, whom he believes disrespected his friend and teammate Leonard Garcia following his rematch win over him earlier this month. But that will get put on hold to stay at lightweight to fight Diaz.