B.J. Penn Wisely Decides to 'Take Some Time Off' to Consider His Future 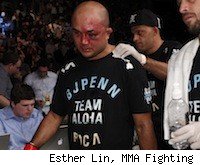 Now that he's had a chance to think it over, maybe B.J. Penn isn't "done" with MMA after all. In a short post on his website entitled "UFC 137: BJ Penn's Message to the Fans," the 32-year-old former UFC lightweight and welterweight champ seemed to leave the door open for a possible return to competition.

"I want to thank all the fans for their love and support," Penn wrote. "I have decided to take some time off to enjoy life, train and teach. I will keep you guys posted with what's next."

It's not exactly a vow to return to the cage, but it is a departure from the dejected note Penn sounded in the Octagon immediately following his unanimous decision loss to Nick Diaz at UFC 137. It's also the right move for a fighter at a career crossroads, who could certainly benefit from some time to relax and think things over.

If you've been following combat sports for a while, this slight change of heart shouldn't come as a surprise. Even though Penn told UFC commentator Joe Rogan that the loss to Diaz was "probably the last time you're ever going to see me" in the cage, that statement came at an emotional time for "The Prodigy."

If he does decide to come back, Penn certainly wouldn't be the first UFC star to declare himself officially retired after a loss, only to return at a later date and in a different frame of mind.

Randy Couture, following his second knockout loss to Chuck Liddell at UFC 57 in February of 2006, told fans that it was the last time they'd see him fighting in the Octagon. Thirteen months later he was back to take on Tim Sylvia for the UFC heavyweight championship, and he'd go on to compete for four more years before calling it quits (again) this past April.

As anybody who's ever come home after a horrible round and golf and declared themselves done forever with the game already knows, the agony of defeat and sound decision-making don't necessarily go together. That's exactly why, even when things started heading downhill for Liddell, he always said he'd decide on retirement in the gym -- not the cage.

Whatever he chooses in the end, Penn's decision not to decide just yet is the right move. He can still compete at the UFC level if he wants to, but if the fire isn't there and the upside doesn't seem worth all the pain and suffering anymore, he'd be wise to move on in life.

At least now we know he'll take some well earned time away to settle on a decision. Hopefully it will be one he can live comfortably with, and without second-guessing himself years from now.